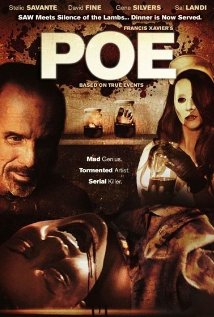 (This movie just shit all over my new rug.)

The script – which announces proudly that it’s based on true events (it’s not) – really likes to repeat itself.  I think the screenwriter thought it sounded smart (it doesn’t) and that the actors could pull off sounding smart (they can’t… oh dear Lord in heaven they can’t).

“She was buried in this blanket or cloth.”

“Is that a coat or coat material?”

“She was expecting to be a mother.”

“I’m going to be looking personally into this myself.”

Oh, and the villain calls one of his victims a “maxim pad” at one point… that was confusing.  He also kept saying, I think, “You’ll address all but food items as ‘chef’ in this house.”  That didn’t really make any sense either.  It’s also pretty clear that the writer had a thesaurus but not a dictionary: he uses many top-shelf words but few correctly.  (A hint: “expiate” doesn’t mean “expurgate”).

It’s obvious that this guy thought he was the absolute shit.  He repeats moronic lines over and over – he clearly loved them.  I imagine him sitting there with a huge grin (and an even bigger erection)  absolutely certain that pure literary gold was dripping from him.  He was so intensely pleased with himself that he’d need to pause regularly to wrap his arms around himself in ecstatic glee.  This was going to change the world!  (I also imagine him very, very high – perhaps on meth – during these times.)

(By the way Francis Xavier [IMDB], wrote this – he gave himself the title “Creator”.  He also directed it.  He also gave himself both “Producer” and “Executive Producer” credits.  Cinematography, editing, makeup and sound?  Yup, Francis Xavier.  He also had an acting credit.  I don’t know whether to be horrified that they’re still letting him walk around or horrified that I still can’t get my shit together enough to mow my lawn regularly.)

The movie spawned from that script is simply horrible.  The camera work is especially vile with many scenes showing only chins or shoulders.  Much of it looks like somebody forgot and left the camera on as they were wandering around.  The acting was terrible and all the more obvious because they were given so very much to say.  Long, meaningless, rambling speeches given in broken, emotionless monotone.

I’ll be honest the only reason I gave this a shot is that I’m an enormous fan of Edgar Allan Poe.  If you wish to honor his legacy find this movie wherever you can and burn it with fire.