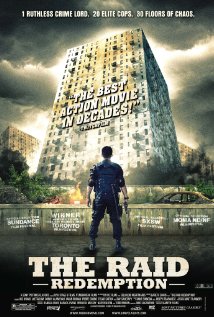 “The Raid: Redemption” on IMDB

My daughter’s one-line review: “THAT WAS AWESOME!”

Who knew that Indonesians could make one of the absolute best action movies that I’ve ever seen?  Hong Kong maybe.  Japan, possibly.  But Indonesia?  Really?  How in the hell did this happen?

America used to own the action movie.  From the earliest serials of the 1930 and 40’s through the golden age of westerns and war movies and into the modern age of the action hero the United States was the cutting edge of the genre.  We defined it.  Sure China had a lock on Kung Fu movies but that’s only because we didn’t want them (those grapes were, um… sour or something).

Then, about a decade ago, something started happening.  The action was getting louder and vastly more expensive but also more commercial.  Directors started worrying about getting PG-13 ratings and how to cut their movies for broadcast.  Green screens and CGI replaced faux-blood and squibs.  Rocket launchers and rail-guns replaced knives and fists.  Acres-wide explosions seen from space replaced tight close-ups on the hero.

American action movies hadn’t really gotten less entertaining but they had gotten significantly more sanitized.  Indonesia, apparently, has had just about enough of that shit.

The story here is simple.  An insane drug-lord has converted an abandoned tenement building into a combination fortress and hotel for the lowest of the low.  Our heroes are a police tactical unit being sent into the building on what they think is a sanction raid.  When things go pear-shaped (and they go terribly, horribly, gloriously pear-shaped) they discover that they are, in fact, on a rogue mission.  Nobody knows they’re there and nobody can help them.

The story is backdrop at best.  The action is the key and it’s frenetic and brutal.  Guns play a role but are completely overshadowed by knife work and hand-to-hand martial arts.  The choreography is fluid and incredibly complex.  Many effects shots are extremely close-up – headshots are especially visceral.  This isn’t the “punch and they drop” mentality that’s taken over American works.  Combatants are tenacious until stabbed (repeatedly), slashed and pummeled.  They’re thrown against the walls and doors, floors and ceilings.  Any useful aspect of the environment is leveraged to inflict pain.  To clarify, let me describe, in some detail, about three minutes of the movie:

Our hero’s, trapped in one of the apartments, have used an axe to dig a hole to the floor below.  They escape and dispatch the occupants below with a combination of gun and axe work but are now beset on two sides (and by snipers from the next building covering the windows).  As one of the attackers drops through the hole after them he’s tackled, mid-air, by a cop who rushes him out the window.  Other cops cover the hole with automatic weapons while another covers the door.  One attempts the axe trick again but is felled from a hail of bullets through the floor.  In desperation our hero (with bullets coming from above, below and through the door) tosses a grenade and propane tank into the refrigerator and shoves it against the door to eliminate the gang trying to break it down.

Again, that was only about three minutes.

I’m sure there are people who prefer the safer, tamer, more family friendly action that we’ve been flooded with over the past few years.  Those people are stupid.  This is the real deal.  This is something special.  This is not to be missed.