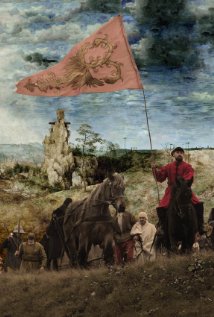 “The Mill and the Cross” on IMDB

Although not completely necessary it might be a good idea to become at least passingly familiar with Pieter Bruegel the Elder’s 1564 painting, “The Procession to Calvary” [wikipedia] before watching this movie.  I’ll wait.

This movie is all about that painting.  I mean literally.  The movie isn’t a metaphor for it or vice versa.  It’s not “featured” nor is it “referenced”.  The entire movie, from frame one to frame last takes place within and around that painting.  Kinda brings new meaning to the term “Art Movie”, huh?

The painting is a sprawling, unruly fictional depiction of Christ’s march to his crucifixion while a (then) contemporary crowd enjoys an almost carnival atmosphere around him.  Several hundred people are portrayed with multiple, apparently independent, themes and focal points set to compete for the viewer’s attention.  The movie attempts to tell the story of the painting – or least several parts of it.

There are really two distinct threads at play here.  The first is a series of vignettes set completely within the world of the painting.  We see small slices of many lives as people wake and get ready for the day.  Children play.  Small acts of kindness, meaningless exchanges and significant acts of brutality approach, then pass, the instant depicted in the painting.  We then see the impact of that instant and the ultimate return to normalcy as it recedes.

The second is a series of conversations between the artist and the commissioner of the work.  These conversations take place wholly within the world of the painting which lends a pervasive surreal quality to the exchanges.  We learn what I presume are educated assumptions, not facts, about the painter’s motivations and the layers of symbolism enriching the work.  As these deeper meanings are explained the characters already introduced take on aspects appropriate to the explanations.  Events within the world inform these conversations which in turn reshapes the world.

Technically there’s almost nothing to criticize.  The movie is gorgeous.  Much of it is due to the meticulous costume and set design but this is fully supported by a deft manipulation of color and light in the cinematography.  The script is sparse – there are long stretches with no dialog at all – but I found it easy understand the multiple points being made.  The painting (and therefore the movie) doesn’t depict truth but rather harnesses the crucifixion to present a flavor truth important to that time.

This is an experimental drama based on a 16th century Belgian landscape painting.  The cliché “bringing art to life” is often tossed around but this is the first time I’ve ever seen anybody attempt it literally.  I found it intellectually engrossing and emotionally moving.