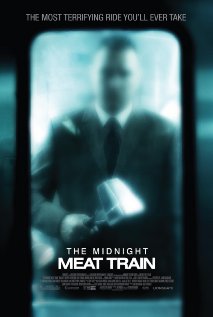 “The Midnight Meat Train” on IMDB

This is a theatrical version of Clive Barker’s 1984 short story of the same name (found in the “Books of Blood” volume One).  While the story was greatly extended (the original story encompassed only a single evening) and several characters added the basic message and drivers remained thankfully untouched.  While Barker definitely isn’t to everyone’s taste at least the movie allows his story to stand fundamentally unscathed.

This is fundamentally a “hidden world” story about what goes on in the subway after hours.  We discover that a methodical killer is (literally) butchering the passengers of a late train in New York City.  He slaughters them, hangs them in the car and dresses them as meat.  Bradley Cooper [IMDB] (in one his last lower-budget roles before “The Hangover” [IMDB] and “The A-Team” [IMDB] made him a star) is a photographer that stumbles on to this truth and is forever changed by it.

The movie is, overall, very well done.  There are a few segments that feel like padding (because they are) but turning short stories into movies generally results in some of that.  The climatic turning point of the movie also rings a little false (why DID she get on the damn train?) but not horribly so; especially for the genre.  Vinnie Jones [IMDB] specializes in looking foreboding and is excellent as the the mute killer, Mahogany.  The supporting cast is filled with high-quality B-listers and the bloody practical effects are good (even if the few instances of CGI look a bit silly).

Breaking it down: if you’re a fan of Barker already, great, you have some taste.  The movie does the story justice although a legitimate complaint could be made that they spent too little time on the end reveal (especially considering all the padding done elsewhere).  If you’re a fan of horror in general then you’ll probably like it as well.  It’s more cerebral than the standard slasher fare but not so much that it would turn off any real fans of the genre.  On the other hand if you don’t like horror then you won’t like this.  Of course if don’t like horror why are you even considering a movie called “Midnight Meat Train”?