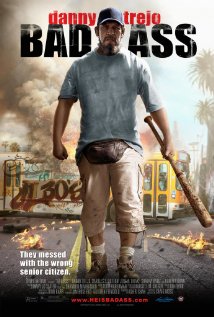 I got this because Danny Trejo [IMDB] was on the cover, period.  It wasn’t until about 20 minutes in that things started clicking that this was somehow, sorta-kinda based on the YouTube-famous AC Transit Bus Fight (also known as the “Epic Beard Man” fight).  This is just… weird.

The real-life event wasn’t really anything for anybody to proud of.  Two old hot-heads (a 67 year-old and a 50 year-old) got into a fist fight on a bus.  They were both kinda jerks, both kinda racist, and both kinda unhinged.  The older of the two guys turned out to be completely and totally pants-crapping-crazy and so became something of a celebrity as more and more reporters stuck microphones in his face and hoped he lost his shit.

In the movie version Danny Trejo is the one of epic beardness.  Instead of trading mildly racist comments with another old crackpot on the bus he beats up two skin-heads threatening mayhem.  Basically the movie gets all of the memes exactly correct.  The same “”I Am A Motherfucker” T-shirt is worn.  The lines “You’re leaking” and “I need an ambulance” are featured and there’s even a character named “Amber Lamps” after the way the man in the original video mis-pronounces  “Ambulance”.  The actual facts?  It misses those at every single opportunity.

Still, considering the ridiculous origins of the movie, it’s not too bad.  Although this is a more serious, down-to-earth role, Trejo is fun in everything.  The supporting cast is solid enough and the bulk of the story – Trejo going after the gang and corrupt politician that had his best friend killed is thankfully far removed from the bus fight story.  The bus fight does make a reappearance in a wildly silly bus-on-bus chase scene at the end but by then, hell, it just seems to fit right in.