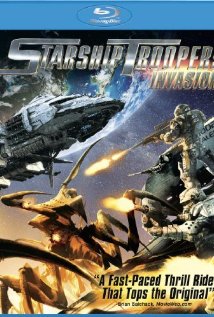 Hells yes, people!  This is, finally, the sequel that the original “Starship Troopers” [IMDB] deserves.  It’s an animated film – a beautiful, intricately-detailed computer animated film to be exact.  (If you still need to be told that animated films aren’t just for kids then call over whoever let you on the Internet and tell them you aren’t ready for it.)

Starship Troopers is a great property that’s spent quite awhile getting shit on.  Purists may still be upset that the first film departed so completely from the book but it did maintain some of the core concepts.  It was also a hell of a lot of fun.  A lot of people hated it but a lot people loved it too – it’s that latter group that was excited for the sequel.

The second movie (to which I refuse to provide a link to protect the innocent) was pure shit.  No jokes.  It was pond scum applied liberally to celluloid.  “Starship Troopers 3: Marauder” [IMDB], on the other hand, did at least two things right: a) they brought back the hero from the original and 2) they brought in more of the lore from the book.  Unfortunately the budget rivaled that of your average bar-mitzva.  The marauders that we’d all been waiting for made nothing more than a dissappointing, cameo appearance despite a huge build-up.  It was still fun and, more importantly, showed that the franchise still had potential.

This most recent entry in the series eliminated budget issues by moving the presentation into CGI.  Better yet, all of the major characters from the original film make major reappearances.  It was disappointing that the original actors weren’t tapped to voice their characters, but not completely unexpected for a Japanese production.

By moving to CGI the scope of the story was allowed to spread.  Massive environments infested with hordes of alien bugs, epic ship-to-ship space battles, an enormous bug-queen and, to cap it off, the best actual marauder action (with Johnny Rico in the cock pit) seen to date.  The story is still, for lack of a better word, “American,” however.   It’s straightforward, understandable and lacks the often confusing metaphysical aspects that are a trademark of many Japanese stories.

The uncanny valley is still an issue, but the characters are all top of the scale (it actually helps quite a bit that they spend much of their time in full, face-less armor).  We get an extended introduction to the new squad that serves us well later as they move into action.  They represent many war-movie clichés (the loudmouth, the philosopher, the rookie, etc) but at its best Starship Troopers was always about celebrating clichés.

This was a damn good war movie and an even better sci-fi movie.  The CGI presentation allowed it to break far outside its budget and really got me thinking about other properties that could benefit from similar treatment (CGI “Hellboy 3”, anybody?  How about a second “Firefly” movie for a tenth of the budget?  Farscape?)  Even if you’re not a fan of “Starship Troopers” you probably won’t find much to complain about.