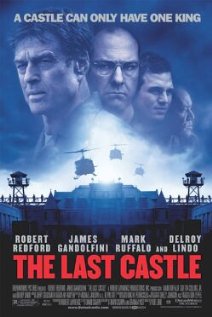 “The Last Castle” on IMDB

You know who makes crappy movies?  Truly terrible, criminally awful movies?  Robert Redford [IMDB], that’s who!  Bad plots, bad scripts, bad acting!  All of his movies almost without exception are pure and utter crap!  They’re pure drivel without any social value or redemptive quality of any kind!  His movies can only appeal to the most debased frat-boy mentality!

Oh, wait.  I’m sorry.  I may have made a slight mistake: everything I said up to now?  Yeah, reverse that.

This is Redford, people!  Of course it’s going to be good!  Granted he doesn’t exactly take any risks as an actor but it’s always a safe bet that anything he’s in will be worth watching.  It’s also got James Gandolfini [IMDB] in it.  He’s, no Redford; more of a wildcard really, but generally a pretty good bet.

Redford is a decorated, highly respected general who, for some reason, is sent to a maximum security military prison (instead of, say, the minimum security resort that any real general would be sent to) for disobeying an order.  Gandolfini is a the petty tyrant that runs the prison.  In shades of “Brubaker” [IMDB] Redford sets out to correct the situation.  Mark Ruffalo [IMDB], in one of his first major roles, is a cynical inmate who comes along for the ride.

My only real problem is that they pretty much gloss over the fact that these are prisoners.  In a maximum security prison.  This usually means killers, rapists and various other violent misanthropes but the prisoners here, aside from some disagreements are pretty much all portrayed as honorable, misunderstood men.  Tough but fair kind of guys.  The kind of guys that might play their stereo too loud but would still help you move a couch.  It stretches belief just a bit.

Forgive that and you’re left with a tight script, excellent performances and some impressive action.  Redford plays Redford better than anybody else.  Gandolfini hams it up a bit, but you’ve seen much worse.  You’ll also get a pretty good baseline plan for MacGyvering your way out of a military prison.  At least if you can convince every single one of your 1,200 fellow inmates to just do whatever you say.