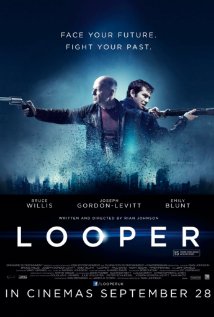 H.G. Wells ushered in the modern era of time travel stories with “The Time Machine” and we’ve hardly slowed down since.  We’ll probably never stop making time-travel movies.  Some kick ass (“The Terminator” [IMDB]), some are silly (“Frequently Asked Questions About Time Travel” [IMDB]) and others profound (“Twelve Monkeys [IMDB] – which, incidentally, also starred Bruce Willis [IMDB]).  Even those with a shoestring budget can get in on the fun as the mind-bending “Primer” [IMDB] ably demonstrated.  Time travel is the gift that keeps on giving.

“Looper” is the latest in this long and prestigious line and will very likely be remembered as one of the best.  Like many time-travel stories, this one needs some exposition.

The story begins in Kansas, 2044.  We learn that 30 years in the future time travel is a reality, but entirely illegal.  It’s primary purpose is for enormous criminal organizations.  Arranged through representatives in the past, they send problem individuals back to the past to be murdered by waiting “loopers”.  The loopers are paid well but know the score: they can’t live past 2074 when they might spill-the-beans about the whole process.  So, eventually, each looper will discover that their current victim is their future self (“closing the loop”).  After that final job is complete, they’re allowed to retire on a generous payout – at least for the next 30 years or so.

Before getting into the good, it must be said, however: this premise is completely retarded.  The idea that these criminal organizations are so powerful that they can hide time traveling equipment, but are unable to cleanly dispose of a corpse is absurd.  We also see that they can pinpoint exact locations and times with their victims… so why use the loopers at all?  Why not just send the unfortunate into a live volcano, to the bottom of the ocean or into orbit?  Finally why would the looper need to kill their future selves; why not have a different looper (one with less chance of being compromised) do it?  No matter how you slice it the foundation of this movie is, to be blunt, dumb as a bag of bricks.

Get over it.  Just accept this one (really) dumb thing.  I promise you, you won’t regret it.

Because the rest of the movie is awesome.  As we bounce through multiple iterations of changing timelines we’re treated to some amazingly subtle performances and an impressively deft sense of staging and pacing.  The action in this movie is, for lack of a better word, realistic.  Guns are imprecise instruments at best and this movie doesn’t shy away from that fact.  The action is necessary but not glorified: more often than not we’re treated to a subdued long shot rather than a frenetic jumble of close-ups and slow motion like most modern action movies.  The movie just looks good.  It challenges the norm and succeeds on almost every level.

The plot is intelligently convoluted without being confusing and morally ambiguous, as there are multiple ideas of “good” competing against one another.  Characters are forced to make horrible decisions and with every one the audience is allowed to wonder, “was that the best choice?”  This is the kind of movie that makes you think; hard.  It’s the kind of movie you talk about for a long time after it’s over.  Yes, the premise is broken, but everything else about it is smart as hell.  We need more movies like this.  Thank you again, time travel!