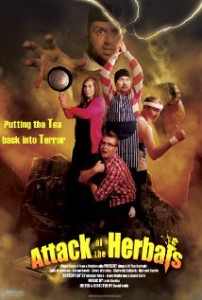 “Attack of the Herbals” on IMDB

Oh those wacky Nazis; what are they up to now?!  Whatever it is you know it has to be both totally evil and totally awesome.  Are they cross-breeding sharks and alligators?  Are they building a killer bees machine gun?  Maybe they’re constructing a secret underground empire where they’re breed an army of genetically enhanced cybernetic gorillas!

Granted it’s evil tea.  It’s addictive and makes you all crazy after a while… but it’s really about the same as PCP or Bath Salts if you trust the news.  But Nazis did make it.  They filled up a great big crate with it and, for some reason the audience doesn’t need to know, they tossed it in the ocean.  75 years later it washes up completely fresh and intact on the beach of a quiet Scottish fishing village where two friends decided to sell baggies of it at post office.  Because, obviously.

The movie has a very slow start.  Our hero is freshly returned from the big city and most of the villagers hate him for doing something (something bad I guess) to the local lobster trapping business.  There’s also subplots about a dickish developer trying to close the post office to build a shopping center, a foul-mouthed lobster trapper whose business is on the brink and a former star athlete who was crippled in a hit-and-run.  We get a very thorough, very long introduction to all of these stories.

Once the entire town goes insane the pace picks up a little bit.  The trouble is that the movie is going for a zombie-vibe but doesn’t put in the effort.  The townsfolk are clearly just out of their heads.  Special effects consist of a little eye-shadow and faux-blood smeared around their mouths.  There’s no indication that anything about their condition is permanent.  They’re not dead and they clearly still have their memories and at least some of their wits.  In short they’re not monsters (or, at the very least, not monstrous enough).  So when the unaffected minority begin indiscriminately killing them it just seems sad.  Sad and unnecessary.

The movie is really trying to be “Shaun of the Dead” but fails primarily because its slacker, doofus heros are actually the cause of the problem.  If they hadn’t decided to bag and sell 75 year-old flotsam their families would be alive now.  Secondly when people do start to go nuts everybody’s first reaction is to kill them with chainsaws and shovels.  I like to think that if a crazy old lady came at me with a whisk I might not cave her skull in with a rock.