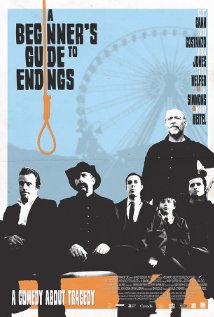 “A Beginner’s Guide to Endings” on IMDB

Had no idea what to expect from this one.  Liked the box art, liked the people in it and had a couple hours so gave it a shot.  The first shot is of Harvey Keitel [IMDB] and that’s usually a good sign.  He’s a low-life who spent most of his life being a bad father to his five sons and has finally done something so heinous that he can’t live with himself.

He had signed his three eldest sons up for a medical trial a decade earlier.  He later found out that the drug would kill them.  Instead of telling them he forged their names, took their settlement money and blew it at the track.  It isn’t until after his suicide that they discover the truth of their unexpected mortality.

The movie sets us on three intertwining paths as we follow the brothers – the boring one, the skirt-chaser and the hot-head – attempting to redeem past mistakes in their final days and doing better for their younger brothers than their father did for them.  Of course, what happens isn’t exactly what’s planned.

The results are gloriously odd, deeply touching and nearly perfect.  The interaction between the brothers and their long-suffering uncle (the always excellent J.K. Simmons [IMDB]) is tight and genuine.  Most importantly the way the characters react to the situation is completely believable.  Things quickly devolve into hilarious ridiculousness but the characters are never compromised in service of a gag.

I will also admit – having grown up in the Buffalo area – the fact that the movie was set in Niagara Falls (and features many places that I am intimately familiar with) was definitely a plus.  But it was icing on the cake; and this was a damn fine cake.  It’s a shame that this didn’t get more attention but it’s really worth the effort to track down.