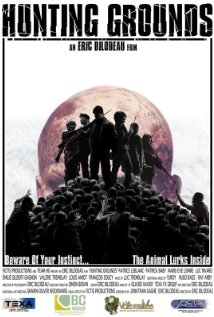 You know how much fun it is listen to drunk people mumble gibberish for hours?  When they get quiet all of a sudden, stare at you with a bleary, squinty eye and demand to know if you’re paying attention?  Maybe they’ll reach out to give you a friendly pat on the shoulder but, upon missing by an arm-length, slip off their chair and bloody their chin.  Now, spit and blood smeared across their puffy face, they accuse you of being rude just before adding vomit to the mix.

That experience pretty much sums up this movie.

It starts out on shaky ground with a really wonky premise.  “Nature”, we’re told in a sometimes comprehensible narration, was is such bad shape that everybody on Earth agreed to be sequestered from it.  Locked up in cities the entire population of Earth gets their nature fix via immersive hunting simulators.

Our hero is bored with the video games.  He waxes longingly over stories from his grandfather about when men killed things outside.  Unfortunately for our blood-thirsty role-model only the most elite get to go outside and enjoy nature.  Someday, he hopes, he’ll be able to kill nature outside too!

So the baseline premise here, at the risk repeating myself, is that we love nature so much we voluntarily imprison ourselves to save it.  We then spend most of our time pretending to kill it and wishing that we could get back outside to kill it for real.

This is a Canadian movie, filmed in Quebec – which mean that it’s partially in mumbled English and partially in mumbled French (with subtitles).  Despite the rock-bottom budget the movie tries to twist together an entire hockey team of plotlines.  This weird self-exile from “outside”, a hunting anthem, criticism of the military, cyber-punk isolationism, genetic modification, zombies, etc.  The budget can’t support any one of them, but all smooshed together creates something so much less than the sum of its parts.

The main value here is unintentional comedy.  At one point we literally see our heroes driving through the woods to reach the gate to the outside… where “nature” is.   It’s really not a bad riffing movie with the right group of people but the often abstruse dialog means that you may spend just as much time starting at each other confusedly.