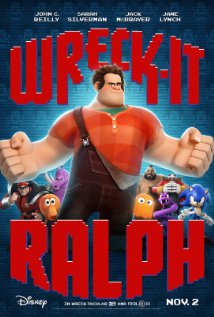 This movie aspires to be nothing less than the “Toy Story” [IMDB] of the video game generation.  It has the same “your playthings have private lives when you leave” theme.  It also features similar “new v. old” and “respect v. apathy” plotlines.  Finally it populates its world with a mixture of classic characters and original characters that fit classic archetypes.  The arrogance!  The audacity!  The cheek!

Damn if it doesn’t (almost) do it.

Before I dig too deep a hole I’ll be clear: this isn’t as good as “Toy Story”.  “Toy Story” is, and may always be, the quintessential playthings-come-to-life movie.  It’s as close to perfection as we’re likely to see and comparing other things to it is unfair.  No, “Ralph” doesn’t surpass “Toy Story” but it gets damn close to it and that’s a fantastic achievement no matter how you slice it.

Before I continue laying on praise, I do have to say a word about the games – I am an unrepentant vidiot after all.  Ralph’s game, “Fix-it Felix Jr”, is as classic an arcade game as any fictional game could be.  All of the other original games (in which most of the movie actually takes place) are clearly not arcade games.  They’re home console games.  They use the design language and have the pacing and persistence of console games.  It probably didn’t matter to nearly everybody but I found it mildly distracting.  No arcade racing game would ever have a “build your cart” mini-game.

Although there are a lot of cameos of classic arcade characters, none are central and most are merely set dressing.  In fact, no time is spent in an actual game (with the questionable exception of “Tapper”) – all the action takes place in the fictional games inhabited by the main characters.  I think this was a missed opportunity and would have loved to see some classic worlds represented.  The three original games are archetypical – a classic 8-bit arcade game,  a first person shooter and a career-based cart-racer – and entertaining but did limit the nostalgia factor significantly.

In exchange, we get several well-realized worlds, some incredibly well-paced action and some deeply emotional plotlines.  It’s the latter where “Ralph” shines.  Each character has legitimate desires, fears and hopes than grow and evolve over the course of the film.  Their relationships to each other deepen and old perceptions are discarded.  Yes, like all Disney movies, it’s wildly manipulative, but like the best Disney movies you don’t care because the manipulation is backed up with strong characters and realistic motivations.

“Ralph” is a classic.  It may not be the meta-game movie (“Scott Pilgrim vs. the World” [IMDB] edges it out in my opinion) but it’s close.  Add in a story that’s completely understandable by non-gamers and undeniably effective emotional hooks and it easily rises head-and-shoulders above the average.  Your family will come back to it again and again (and no matter how many time you see it you’ll always end up choking up a little at Ralph’s “Iron Giant” [IMDB] moment).