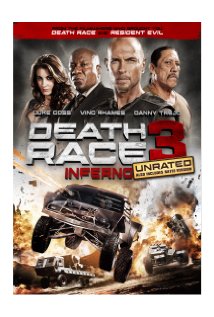 The Death Race movies are really odd ducks.  The original “Death Race 2000” [IMDB], released in 1975 by legendary producer Roger Corman [IMDB], showed us the dystopian future of the year 2000.  An annual trans-continental race (which actually started in 1980) where points are scored for pedestrian deaths and the brutality of kills is the national sport.  The star of the sport is “Frankenstein”, a disfigured racer who has never been beaten.

[There will be spoilers for the previous movies ahead.]

The 2008 reimagining, “Death Race” [IMDB], a big budget, star-studded summer action movie.  This toned things down a bit by co-opting the script of “The Running Man” [IMDB].  Now the racers are convicted criminals and is run on closed, maximum security track.  Frankenstein returns but is killed early on, to be replaced by our hero.  After lots of explosions there’s a happy ended.

The movie put a pretty definitive nail in the coffin of the whole idea as it was presented so what was the direct-to-DVD “Death Race 2” [IMDB] to do?  Make a prequel, of course!  The movie, using more than a little recycled footage from the first film, tells the story of how Frankenstein became Frankenstein.  The movie ends setting up the first with our hero horribly disfigured.  There are only two problems: 1) The movie wants us to like our hero so he’s not a total dick and 2) Frankenstein was a total dick.

What to do?  Yes – make a third movie!  This very one!  Set it right after the second one and spend the first 10 minutes twisting the plot into a pretzel to restore our hero and set things on track.  Move the whole shebang to the desert (because it’s cheaper) and spend the last 10 minutes twisting the plot into another, different pretzel to ensure that everybody gets exactly what’s coming to them.  Fill in the middle with car-mounted cannons, explosions and the odd chick-fight and you’ve got yourself a movie!

Which does, for those still following, mean that “Death Race 3” occurs after “Death Race 2” but before “Death Race”.  Oh, and none of them really have the first damn thing to do with the 1975 movie.  Got it?  It’s really very simple in a completely convoluted, not-at-all-simple way.  There hasn’t been this much effort to keep characters in play since the “Saw” franchise.

Still, if you like watching cars blow up then this isn’t so bad and you’ve probably already seen the other two anyway.  If for some reason you’re watching this without having watched the first two then you should probably just skip the first 10 and last 10 minutes; they’ll just annoy you.