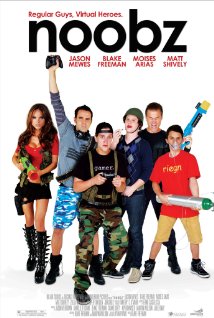 This is sorta, kinda, almost a remake of “The Wizard” [IMDB].  Like that weird little classic a group of friends, in this case a “Gears of War 3” clan, go cross-country to compete in a giant video-game championship.  The major difference is that the main characters here are thirty-something slackers.  The main similarity is that they, also, really don’t seem to know much about gaming.

The movie has a weird split-personality when it comes to gaming.  One hand the characters are stereotypical and pretty one-dimensional.  There are very few actual gaming references beyond a huge number of T-shirts.  One the other hand the movie makes an real effort to showcase the games.  Well, “game”, since Gears of War 3 is literally the only game we see.  During the tournament we get a rather frenetic split screen of the gamers and their online actions.

More damaging is the fact that the characters just don’t have much personality and what they do have is uneven.  Our lead, Blake Freeman [IMDB], is also our writer, director, producer and editor.  He falls into two significant traps: 1) he tends to give his character the lion’s share of the lines and 2) he can’t act for shit.

This means that the honest-to-goodness actors in the cast get fewer lines.  Jason Mewes [IMDB] may not be the best actor in the world but he’s better than anybody else in this and completely wasted.  It doesn’t help that the story is a muddled mess.  There’s weird dangling threads and one of the oddest, most unsatisfying endings I’ve seen in a long time.

There are some honest laughs here but they’re overwhelmed by a raft of pointless, juvenile, overly-staged gags.  Most of them simply fall flat but there are few that are downright embarrassing.  The best I can really say about this is that they tried.  There’s whole baskets of good intentions here and that does go a long way.  The worst I can say about it is that it was pretty shitty but that’s not completely fair (even if it’s mostly true).  There’s definitely room for a good movie or five about gamer culture.  Sadly this isn’t it.