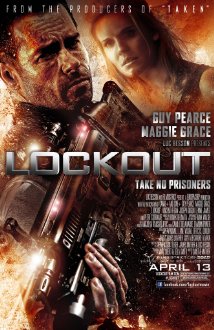 Other than that, it’s pretty much the same.  Snow is a smart-ass (in this case wrongfully accused) bad-guy set to head into the prison when the shit hits the fan.  He’s offered a full pardon if he takes on the suicide machine of rescuing the girl.  We get a little scene where he gets some neat toys (even including a wrist-mounted map display).

I had low expectations from the first twenty minutes.  There’s a horrifically bad motorcycle chase sequence that looks like it was pulled straight from a (last generation) video game.  Once we get into space, however, things do start to look better.

My main problem with the movie is technical.  If you’re willing to overlook the insanely stupid science then you can skip this section (and the spoilers it contains).  If not, then welcome to a how-to video on how not to build a space prison.  First, this facility is designed to hold up to 500,000 prisoners in stasis (although we only have the first 500 test subjects currently).  So we:

There are other insanities (like the fact that there’s a “Low Orbit Police Department” and that even with all of these massive endeavors the ISS is still up there to be referenced).  The really sad part is that almost none of these were really needed.  There were clearly less lazy, more intellectually honest ways to get to the points that we needed.  They just didn’t bother.

For those that skipped the previous section then, hey, you got a nice little action movie in space.  Nothing groundbreaking but not bad overall.