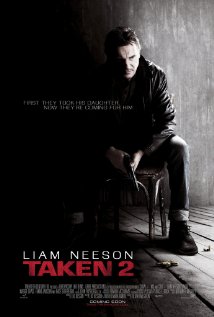 The original “Taken” [IMDB] was something of an oddity among action movies.  In a genre split between biceps and explosions or massive conspiracies and lone-wolf operatives it was a simpler, smaller more intimate movie. Yes, Liam Neeson’s [IMDB] Bryan Mills commanded resources and skills out of scope for most but the story was universal: somebody took his daughter and he was going to get her back.  I enjoyed it immensely.

“Taken 2” picks up about a year after the first.  The only real issue with this is that, as undeniably beautiful as she may be, it’s getting a bit difficult to believe 30 thirty-year old Maggie Grace [IMDB] as an eighteen-year old.  In any case our hero has some routine work to do in Istanbul.  He offers to take his ex-wife (who is having issues with her new husband) and daughter with him for an impromptu vacation.  Unfortunately, the father of one of the men he killed retrieving his daughter in the first film has a different plan.

As with the first film, the action here tends to be more subdued but less focused than the original.  Similarly the movement through the film is intricate but not as subtle as the first either.  There are a few jarring, “what the hell?!” moments strewn throughout.  The ending also felt rushed and more than a little lack-luster.   None of this was enough to completely derail the effort but enough to make one feel that this, more than the first, was written by committee.

So no, sadly this wasn’t as good as the first movie.  It lacked the single-mindedness and passion.   Neither is it as bad as many of the other action movies coming off the Hollywood assembly line.  In short, this movie really only fails when in comparison with the first.  Considered alone it’s an above average (but not much so) thriller that’s worth a look.