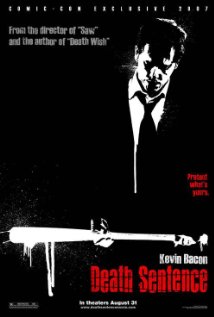 The poster says “from the author of ‘Death Wish'” and you should probably take note of that because for all intents and purposes this a remake of that classic.  Not in the details, mind you, but in the broad strokes this is soooooo “Death Wish” [IMDB].

Kevin Bacon [IMDB] plays Nick Hume, a white collar executive with a perfect life.  His beautiful wife has given birth to two beautiful sons (one of whom isn’t a complete disappointment)!  They live in a nice house, in a nice neighborhood and have nice times together.

We know all this because of the extended montage of home movies in the opening credit sequence.  Birthday parties, anniversaries and lots of sappy, lovey-dovey moon-eyed smooching.  This movie is all about emotional manipulation.  Even the main character’s name, “Hume”, is clearly (and pretty ham-fistedly) designed to imply “human”.

Taking that for granted, the movie as a whole is actually pretty good.  Of course something terrible happens to this idyllic family unit and dad, feeling powerless, decides to take matters into his own hands.  What follows is an ever-escalating battle between Nick and the criminals that ruined his life.   The ramifications of each decision are clear and untempered.  There’s no sugar-coating here; expect more than a couple gut-punches to land.

While the plot is sparse, it does the job.  Bacon delivers an excellent performance as do several of supporting cast, including John Goodman [IMDB] as a world-weary gangster and Aisha Tyler [IMDB] as a detective who’s seen too much.  The action sequences are very well filmed and paced.  There is some action-movie hyperbole but, for the greater part, Nick’s actions are (in this context, at least) reasonable have realistic repercussions.

There aren’t any new ideas here but the story is clean, well-paced and well-presented.  The subject matter may be a little raw for some but at least it’s emotionally valid and non-gratuitous.  It probably owes more than a little to Bacon’s general likability.  Fans of “Death Wish” and it’s many imitators should enjoy this but don’t expect a Hollywood pay-off at the end.