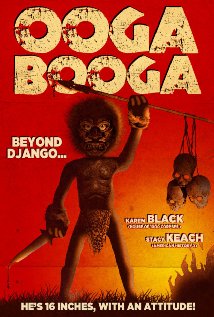 The basic story is that a young black man, celebrating his graduation from medical school with a giant Slurpy, is viciously gunned down by a racist cop for a crime he didn’t commit.  For reasons that are just too completely bat-shit insane to summarize he’s carrying around a large, incredibly racist “spear chucker” doll complete with a bone-through-the-nose, a loin-cloth and smoking a joint.  The Slurpy machine malfunctions and – I shit you not – the electrical sparks combined with the spilled Slurpy transfers his soul into the doll.

Granting that (and why wouldn’t you?) the rest of the movie is a horrible mush centered loosely around he and his girlfriend getting their revenge on the racists.  One problem –and there are so many problems – is that while we’re told racism is bad there are apparently no problems with other stereotypes.  The police in this movie are “pigs” or “piglets” and the bacon references come hot and thick.  Another is that the movie lacks even the most rudimentary form of subtlety.  The racists in this movie are so one-dimensional you can’t see them from the side.  The few actual race issues that are brought up are horribly framed and often undercut by a pervasive hypocrisy.

For example when our hero’s have left their radio on too loudly (in one of the many scenes completely lacking context) their neighbor complains with a speech so fraught with racial cliché it would cause Archie Bunker to blush.  Ooga Booga kills him.  When a corrupt cop is killed they stuff an apple in his mouth and talk about slaughtering pigs.  When it’s revealed that an old, and clearly senile, woman collects offensive “Sambo” dolls Ooga Booga naturally kills her.  However later (spoiler, but who can care?) the girlfriend accepts a large amount of cash from the sales of horribly racist dolls!

I will admit that some of the acting was, in the context of the budget at least, passable.  This was offset by several truly awful performances.  The special effects were universally pathetic with the real-time puppetry of the titular character some of the worst I’ve ever seen.  From a filmmaking standpoint however the biggest issue was the completely nonsensical script and total lack of continuity.  Most things happen for no apparent reason.  We never learn how major facts are discovered and the character relationships are a rat’s nest of unlikely threads.

This is a movie where both a man in a pig costume and a possessed toy have extended masturbation scenes.  It’s a movie where a woman is violently gang-raped only to have it implied later that she placed herself in that position on purpose.  It’s a movie that is clearly attempting its audience into racial sensitivity while simultaneously being horribly misogynistic and stereotypical in so many other ways.  It’s a movie that has the giant, brass balls to try and link itself to greatness with the tagline “Beyond Django”.  If you have a penchant for terrible movies then definitely give this a shot; otherwise steer very wide of this one.