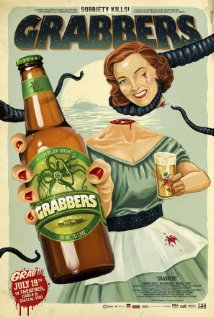 We had it in our heads, for some reason, that this was going to be another terrible SyFy Channel-style CGI-monster crapfest.  We crowded around the TV, claws unsheathed, ready to have a blast tearing this terrible piece of shit to tiny shreds.  Sadly we ended up disappointed.

You see, it ended up being good.  Even very good.

They story takes place in a tiny Irish fishing village on a forgotten island off the coast.  Unfortunately vampiric alien-squid-things have fallen from the sky and taken up residence nearby.  Unable to survive on dry land but needing fresh blood to survive they wait until it rains to come ashore and pick off the villagers.

The town police, an unrepentant drunk and a career-driven temp filling in for the vacationing sergeant, soon realize what’s going on.  They discover that the only defense against the creatures is drunkenness: the creatures are allergic to booze.  So they gather up the townsfolk into the local pub to weather an approaching storm in style.  The whole thing sounds ridiculous (which led us to our initial assumptions) but actually works quite well.

Much of the cast will be pleasantly familiar to those who favor British television.  All of them acquit themselves well.  The quality of the cast extended to the script, direction, staging and effects; all are surprisingly effective.  The creature effects, particularly, are very impressive for the budget, especially considering the complexity of the animation required for the squirming, writhing, multi-tentacle’d monsters.

If things are a bit clichéd, well, that’s to be expected in a movie like this.  While there are a couple of decapitated heads tossed about, the action is mostly bloodless and tame by modern horror standards making this an excellent family fright-night feature.