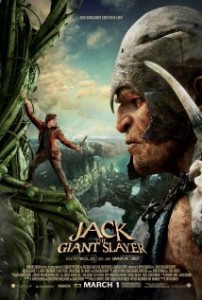 “Jack the Giant Slayer” on IMDB

A retelling of “Jack and the Beanstalk” the movie plays fast and loose with the particulars of the story but stays comfortably in the genre.  It adds a beautiful, strong-willed princess; a heroic, selfless knight; a devious royal advisor and ups the giant-ante considerably.  Instead of our hero outwitting a single giant we get a whole big bunch of giants!

Here the giants – who have a sweet-tooth for people meat – have faded to legend because the magical beans that bridge their world to ours have been keep safe for hundreds of years.  Of course the beans resurface, the beanstalk grows and Jack and the Princess are caught in the center of everything.

The effects are well done but have an odd lifelessness that dulls their potential edge. The beanstalk is appropriately epic (especially when it falls) but fails to truly emerge as the character that it could be.  The giants are each given nicely effective visual personalities which helps offset the fact that they don’t have much in the way of actual personality.

The story is predictable but nicely straightforward and consistent.  To its great credit there are absolutely no topical pop-culture references or inanely out-of-place bubblegum pop songs.  In fact it might be argued that the movie takes things almost too seriously at times (and may be a bit too raw at times for the younger set).  For my part I’d much rather see that than another dumbed-down “family film”.

In what’s becoming something of a Hollywood cliché recently the movie tells a nice, interesting human story then ends in a massive, hour-long CGI battle sequence.  I may have preferred a more direct, subtle interpretation but who am I to argue with an army of giants throwing flaming trees in to a city surrounded by a moat of burning pitch?  It may be an ultimately forgettable popcorn movie but I’m having trouble considering that a truly bad thing.