I, along with reportedly about a million others, heard the low $35 dollar price during the Google presentation on Thursday and ordered myself a Chromecast.  I really didn’t know what it was, but it was cheap, it was new and I wanted one.  Yes indeed, being gainfully employed has some perks.

The device, it turns out, is about as simple as tech gets.  Working with the Chrome browser on any PC and apps on most phones/tablets (both Android and IOS are supported) you can easily send Netflix, YouTube and other browser-based media content to your TV.  Although the list of compatible applications is sparse now, Google promises significant expansion.  I ordered mine from Amazon (free Prime shipping increasing the attraction) and took delivery today.

The device comes in a small, attractive, slip-cased box.  In an era of bare minimum the Chromecast bucks the trend by including everything that you might need right in the box.  You get:

Everything is basic black and well-constructed.  My only complaint is that the HDMI extender is extremely stiff and needs to be forced to bend.  It feels like it may put strain on the port in some configurations.  Here are some requisite unboxing photos. 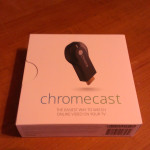 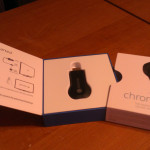 The open slipcase and setup instructions. 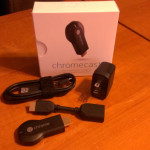 The entire kit unboxed and ready for installation.

Set-up is simple, but may be a challenge depending on your personal configuration.  Setting up the physical hardware may range from a no-brainer to nightmarish.  You need to plug the device into an available HDMI port to transfer the video and a powered USB port for power.  This can cause a significant tangle in some setups.  In my case I was able to power the device (plugged into my HDMI receiver rather than my TV) easily via a happily available rear USB port on my cable box.  Others may not be so lucky.

Once the hardware is ready you’ll need to set up the software.  This requires a device on the same wifi connection that you’d like to use your Chromecast on.  This posed a minor annoyance to me as my personal PC is connected via a wired LAN port.  I was able to use my son’s laptop to complete the process but an optional set-up via a direct USB connection would be a nice option.  You can also, of course, set up the device via your phone or tablet by using an app available for the purpose.

The setup process itself is simple: you connect to your Chromecast via the app, enter your wifi credentials, wait a few moments and you’re done.  Chromecast is now patiently waiting for your commands.

When Chromecast is active the TV displays a simple status screen with basic Wifi information and some inoffensive nature wallpaper.  The status elements and wallpaper change position regularly (to prevent burn-in, I suppose).  When a command is received you’ll get a brief splash screen for the sending application then the content in all it’s glory.  The device’s interface is completely static; all manipulation happens at the control point (your PC, phone or tablet).

Sending content to the Chromecast is insanely simple.  Compatible applications will automatically display a Chromecast icon when on the same network as an active device; any active device.  There is no per-device client setup at all.  Choosing the icon will display that content on your TV.  Simple.  PC’s will need to use Chrome, with a Chromecast extension.  Phone and tablet users can find the new icon in Chrome, Netflix and YouTube.  Android users can also access GooglePlay audio or video.

Google has already announced that Pandora will be the next application to be made Chromecast compatible.  They are also releasing a free Chromecast API allowing developers to add support as easily as possible.  The possibilities are endless but likely will end up limited by the same myopic business decisions crippling television functionality in current applications.

Commands register quickly and seamlessly.  It’s worth understanding that the media is not actually sent from your phone/tablet/PC; rather the Chromecast device pulls the requested media directly from the source over wifi.  Your phone becomes, essentially, a highly effective remote control.

The exception to this is the screen-mirroring functionality (currently beta).  You can send any tab in the Chrome browser to the TV and this material is compressed and streaming from the controlling device.  This allows you to view any browser-based content on your TV including services like HBOGo, Spotify, etc.  I watched HBOGo using it and found the video jittery and slightly fuzzier than on my computer screen but still watchable.  There’s a minor issue in that to view any mirrored content full screen you have to dedicate your sending screen to the content as well.  I could watch the video minimized on my computer but only with the full interface on the TV.  It’s an interesting option, but still rather rough-edged.

It’s worth a reminder that this review is based upon just a few hours with the device.  That said the device is so simple that a few hours should be all you need.  It does exactly what it claims to do – no more, no less – and it does it well.  A lot of other devices have similar functionality and some come close to the same ease of use, but nothing I’ve used to date is so utterly brain-dead simple.

That said, if the functionality of the device isn’t extended dramatically, there’s every possibility that it will quickly fade to irrelevance.  My PS3 and XBox can both do Netflix and YouTube nearly as well right now.  I can only assume that the PS4 I’ll be receiving in a few months will do even better.  These boxes are also wonderful DLNA media clients for my personal pictures, music and movies and each features a dozen or more other steaming services.  Of course, each of them also cost roughly eight times more than the Chromecast, but if you already have one of them (or a Roku or any of a number of other options) it’s difficult to recommend Chromecast.

The Chromecast can’t currently display any media local to your device or on your network.  It can only display content from non-native services via Chrome and the rather mediocre tab-mirroring feature.  It also, it bears repeating, only costs $35 – less than half any remotely comparable alternative.  As a second (or highly portable) solution for Netflix and YouTube, or if you happen to be a big consumer of Google Play media, it really can’t be beat.  With the weight of Google behind the device the prospects of a rapid expansion of features and services seems very likely.  If that happens, the Chromecast will be a segment defining device.  As it stands it’s still an incredible value for the limited service it provides.