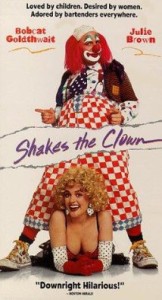 “Shakes the Clown” on IMDB

There’s a lot going against this movie.  It’s entirely reasonable to say that the movie is a one-joke pony.  It’s slow in that 90’s movie way that seemed completely normal at the time, but now seems downright odd.  Once you get past the (many) alcoholic clown gags the whole thing is pretty clichéd.  It also starts with the greasepaint-and-urine-smeared aftermath of a one-night stand between Shakes and Florence Henderson [IMDB].  On second thought, no; that’s an outstanding positive.

The basic plot is pretty standard.  Shakes is perhaps the greatest clown in town, but is hamstrung by his drinking problems.  His long-suffering girlfriend, a rising star in professional bowling, is ready to call it quits and his friends are finding it more and more difficult to support him.  When an odious rival gets a coveted gig as a TV clown, it sends Shakes into a further downward spiral until he is framed for the murder of his mentor and has to clear his name.  You know, your basic 90’s movie.

The are pieces of this that you’ll carry forever.  The clown-culture depicted may not be accurate, but it’s funny as hell.  Birthday party clowns are our everymen, the regular polka-dot-collar schmoes just working for the weekend.  Mimes are the snobbish elite and the birthday-part clowns hate them.  A lot.  Yelling, “A mime!  Get ’em!” will always get a laugh around here.  Who are the tough, criminal, drug-dealing element?  The ones you cross the street to avoid?  Rodeo clowns, of course!

Weirdly, it all works.  Most of the time.   Writer/star Bobcat Goldthwait [IMDB] is an absolute master at forcing uncomfortable laughter out of an audience.  The movie works best with this wincing, cringing, guilty hilarity.  Unfortunately, and as might be expected for a first feature, there’s also a tendency to pull back into more traditional, but less innovative, gags and one-liners.  This pulls the movie down making it a dully average affair punctuated with moments of sheer genius.  Committing completely to the darker, experimental material could indeed have alienated audiences.  It might also have made this one of the greatest things ever.