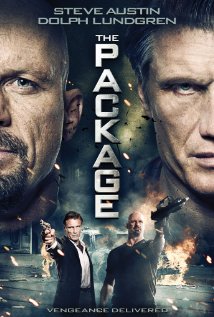 “The Package” on IMDB

[This is the second selection in my irregular, “My Wife and Kids are Visiting Relatives and I’m Home Watching Movies” film festival.]

Steve Austin [IMDB] acts!  Acts like a guy with muscles!  He punches things!  Things and people!  Also, as an aside that will potentially get my ass kicked if I ever actually meet Steve Austin, he runs!  Steve Austin is hilarious when he runs.  Its like watching the toddler love child of the Pillsbury Dough-boy and the  Michelin  Man.

The rest of the movie isn’t nearly as funny.  Steve’s a low-level mob collector that’s asked to deliver a package for his high-level boss.  Things go pear-shaped in all sorts of completely predictable ways and Steve has to navigate competing factions who both want to get their hands all over his package!  (Sorry… couldn’t resist that.)

Dolph Lundgren [IMDB] (who, I might remind you, has a Master’s Degree in Chemical Engineering, was given a Fulbright Scholarship to MIT and is actually a pretty damn good actor when he’s allowed to be) shows up as “The German”.  It turns out the package is his and his enemies are after it.  There’s a twist, of course, that was broadcast loudly and clearly and the movie spends the last 20 minutes mopping up all the obvious threads opened earlier.

This is about as average an action movie as you’ll ever see, but it is average.  In other words it doesn’t suck.  If you like any of the people in it or just appreciate the genre this is a perfectly fine distraction.  Come for the mediocrity, stay to laugh your ever-lovin’ ass off at Steve Austin running!