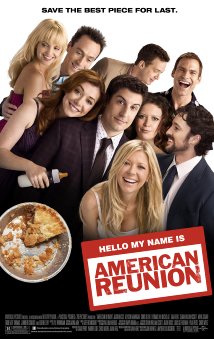 [This is the first selection in my irregular, “My Wife and Kids are Visiting Relatives and I’m Home Watching Movies” film festival.]

All told this fourth theatrical release actually makes for the eighth “American Pie” movie in 13 years.  Does it stand up?  Does the world need that much pie?  Will any of these people ever appear in a non-pie feature film again (no, Tera, “Sharknado” [IMDB] does not count)?

The movie begins with a dumbass excuse for why the gang is going to a 13-year high-school reunion.  Were the filmmakers so hard up for money that they couldn’t wait two more years while being simultaneously so moral that they could just lie and say it was their tenth?  Really, who in the hell goes to a thirteenth-year high school reunion?

Anyway.  Our group of friends have progressed pretty normally in the nine years since the last film.  Jim and Michelle are in a toddler-induced sexual slump, Oz has a great career but an emotionless personal life and Kevin has the opposite.  For various reasons nobody’s heard from Finch, Vicky or Stifler and they all seem pretty good with that.

The movie brings out the same gags in new clothes and why shouldn’t it?  They still all work pretty well.  The cast has a comfortable relationship with each other and this kind of material and it shows.  Oz is a straight man, Jim is embarrassed and Stifler’s an ass.  Ladled like lumpy gravy throughout is enough warmth and nostalgia to raise it above rote mediocrity.  Covering so many characters sometimes feels forced but it’s hard to argue when essentially all of the hanging threads from the previous movies are handled with care.

The movie has the same faults as the early ones, but it also has the same charms.  As a loving closing point to the series it performs significantly better than the lackluster, formulaic “American Wedding” [IMDB].  For fans of the series this is a must-watch and for those who hate it there’s nothing to change your mind here.  For everybody else this is a decent raunchy comedy with more soul than some.