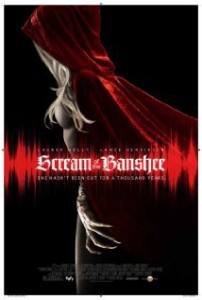 “Scream of the Banshee” on IMDB

Way back in the history times people wore metal clothes and everybody lived in the woods at night in a country called “Europe”.  One of the towns in Europe was painted green and populated by bagpipe elves called Limericks.  It was called “Ireland”.  All that remains of this place today is legends and breakfast cereal.

Whenever a monster came around Ireland the toughest people put on their nicest metal clothes and chased it on horses.  Since they all lived in the woods at night this was very exciting.  When they found the monster, they cut of its head and saved it.  Since the head was so dangerous they put it in a box and locked it with a glove.

A million years later the box was found by a scientician from a college.  He didn’t like the box so he put his name on it and hid it behind a wall cleverly made of paper and slime.  20 years later a hot girl finds it, brings it to her hot professor and they poke at it with a glove until it opens.  Inside is a goblin head that screams and disappears.  If anybody hears the screaming they have to be dead now.

So they find the pot-bellied scientician at his crazy house.  They go in to fight him because he’s crazy and likes the box now but he’s actually outside so they hide and he comes in.  Then they walk outside to find a cave that looks like a basement to fight the monster.  They don’t have metal clothes so they stab the ghost to make it so they can shoot the ghost but then don’t so they can use the box on the ghost.  Then the scientician does something and the movie ends.