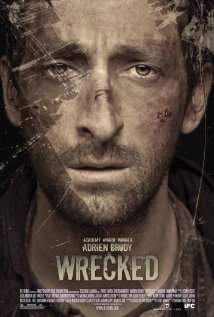 [This is the seventh selection in my irregular, “My Wife and Kids are Visiting Relatives and I’m Home Watching Movies” film festival.]

The movie starts with Adrian Brody [IMDB] regaining consciousness in the passenger seat of the wrecked heap of a car which has clearly tumbled down a ravine deep into the forest.  His leg is trapped, the driver’s corpse has been flung far from the car and another corpse slumps in the back seat.  He has no memory of the events that led to his situation.

As the hours turn to days the convenient, but wholly unbelievable, amnesia is pierced  by clues and hallucinations.  A robbery took place.  Was he involved? What did he do? Is rescue just as much a death sentence as starvation?

The movie loses its nerve about halfway through.  It expands the setting and brings in other characters.  This is for the worse in my opinion.  If a movie like “Buried” [IMDB] can be great with vastly less to work with certainly this could have been.

Notwithstanding several last-second twists this was a decent flick.  Brody carries the solitude well and the memories being pieced together were interesting.  I still can’t help but think that a purer, more focused perspective would have made it something special rather that just something.