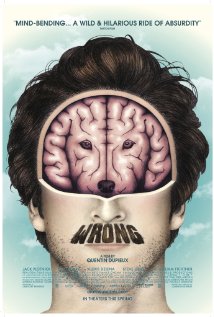 [This is the sixth selection in my irregular, “My Wife and Kids are Visiting Relatives and I’m Home Watching Movies” film festival.]

Well, if you liked that then you’ll like this.  If you watched rubber and spent the whole time infuriated, well then, you’re not going to love this either.

Made by the same folks with a lot of same actors this movie follows in the spiritual footsteps of “Rubber”.  It’s very well done, technically.  The staging and cinematography really can’t be faulted.  The characters are interesting and the acting excellent even considering that they’re spewing nonsense most of the time.

The problem here is that the movie provides no ground for the audience to stand on.  We follow the tenuous thread of our hero looking for his dog but everything else is up for grabs and a lot of the ideas just aren’t as clever as the filmmakers seem to think they are.  “Dreamlike”, in both the best and worst possible senses, doesn’t really begin to cover it.  “Rubber”, at least, had the good sense to establish rules, however ridiculous they may be, and stick with them.  This doesn’t even give us that.

I did like the movie but have reservations about recommending it.  This is the cinematic equivalent of black licorice: some people love it but live with the fact that most people hate it and even those that love it couldn’t stomach it all the time.