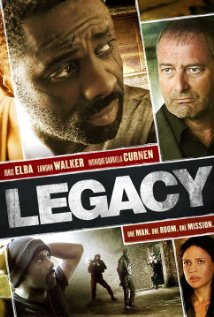 [This is the twelfth selection in my irregular, “My Wife and Kids are Visiting Relatives and I’m Home Watching Movies” film festival.]

After finally catching up on the exceptional British procedural, Luthor [IMDB], I made an effort to find more of Idris Elba [IMDB].  This popped onto the radar and I’m glad it did.  Elba plays Malcolm Gray, a former black ops soldier who was part of a very successful, and very illegal, assassination squad.  After being captured by one of his targets and brutally tortured for months he is finally freed and makes his way back to the U.S. where he attempts to expose those responsible.

Nearly the entire film takes place in the seedy apartment where Malcolm is hiding.  As the story proceeds his sanity, and the reality as the audience understands it, shift dramatically.  His mental breakdown, often seen only in a twitch or an agonized glance, is completely believable.  He impresses me more and more every time I see him.  The few other roles are adequately cast but Elba’s performance is absolutely make-or-break.  The entire film hinges utterly on it and he doesn’t fail.

The script can be plodding and sometimes ham-fisted but somehow Elba makes it work.  Without him this a dreary, low-budget snore-fest.  With him it’s a tense, tight psychological thriller.  Even if considered nothing more than a vehicle for Elba, an extended audition tape for more mainstream projects, this can only be considered a success. This overlooked gem reportedly came in for a budget of less than a half-million dollars.  It’s a steal at ten-times the price.