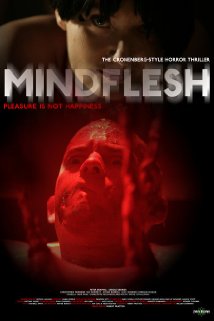 [This is the lucky thirteenth selection in my irregular, “My Wife and Kids are Visiting Relatives and I’m Home Watching Movies” film festival.]

I’m going to let IMDB’s summary of the movie kick us off on this one:

“MindFlesh is a psycho-sexual horror/thriller about obsession. Chris Jackson is a taxi driver with a childhood trauma. The trauma has made him a portal for obsessions to pass from the mind to the physical world and hence disrupt the world’s multiple planes of reality. Extraterrestrials that police the universe threaten to kill Chris’ friends unless he conquers his past.”

The entire movie is just like that.  With tits.  Wave after wave of gibberish of all kinds.  Verbal, visual – even subtitled alien gibberish – for over an hour.  And tits.

This guy can make obsessions come to life.  In practice all that means is that naked mean girls covered in slime pop up now and again.  They have some rough, uncomfortable looking sex then enjoy more gibberish.  Aliens show up who, they warned you, “protect the world’s multiple planes of reality”.  They demand that this guy face his childhood pain for absolutely no apparent reason.  Continuing with the “no apparent reason” theme they threaten to kill everybody he knows unless he does.

If nothing else, should you find the time, read some of the IMDB reviews on this one.  They are all weirdly glowing, insanely long and freakin’ hilarious as they try to logically explain what any sane person would realize in minutes is nothing but a sticking, steaming pile of gibberish.  On the plus side it is British and even gibberish sounds pretty good in a British accent.  Also, I suppose, there are tits (although honestly if you’re that hard up learn to Google, dammit).