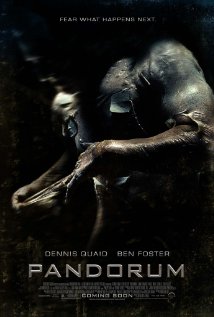 [This is the fourteenth selection in my irregular, “My Wife and Kids are Visiting Relatives and I’m Home Watching Movies” film festival.]

I had seen this when it was released and loved it.  With so much to watch piling up I rarely revisit a movie.  I’ve just been watching so much schlock over the past few days that I needed a bit of a palette cleanser.  A dark, expertly drawn, cannibalistic palette cleanser.

Bower, played by Ben Foster [IMDB] (somebody we’ve not seen enough of lately), and Payton, played by Dennis Quaid [IMDB] (doing some of his better work), are on the flight crew of the colony ship Elysium.  Awakened from hyper-sleep with unexpected memory loss they can’t understand why the ship is in such disrepair, where they are or, most importantly: where is everybody else?

Bower is forced to make his way through the maintenance conduits of the ship, guided by Payton, in an effort to restore reactor power to the ship.  As he proceeds he’s attacked by brutally savage humanoids and discovers other survivors who help to fill in pieces of the puzzle.  The action sways expertly between quiet, exquisite tension and frenetic, heart-pumping action.  The cinematography and set design convey the dense, mechanical claustrophobia and, when needed, the vast expanse of Elysium perfectly.

One of the highlights of the movie is the way the story unfolds slowly but inexorably.  The filmmakers do lose confidence once or twice and reinforce the story with unnecessary, extended exposition but even this is exceedingly well done.  While the movie is complex the script deftly and cleverly addresses every outstanding question raised.  The movie works so exceedingly well because, like “Alien” [IMDB] before it, all of the elements are both believable (if fantastic) and logical.

“Pandorum” is a underappreciated classic that was woefully and sadly under-marketed.  I can only compare it favorably to other genre-defining sci-fi thrillers like “Alien” and “Pitch Black” [IMDB].  It’s an absolute must-see for hard sci-fi and horror fans.