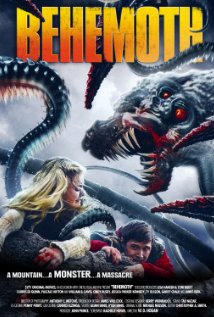 [This is the seventeenth selection in my irregular, “My Wife and Kids are Visiting Relatives and I’m Home Watching Movies” film festival.]

Another SyFy Original!  There are just so god-damned many of them it’s nearly impossible not keep running into them.  They’re the “Mr. Goodbar” of the Hershey’s Miniature assortment two days after it’s been opened.  Apparently, in fact, this is the twenty-third film in the Maneater Series!  And that’s only one series from one distributor!  Here’s a partial list of over 153 soon-to-be considered classic SyFy movies!

Anyway, this one centers on a mountain that’s also a monster.  Of course the monster is all tentacly so it can poke at regular old people but really, it’s the size of a mountain!  Like most SyFy movies it just doesn’t know when to quit.  Instead of the giant monster just being the local mountain they continually infer than the creature “wraps itself around the Earth” and that it “existed before time”.  It was already stupid, folks, why make it preposterously, ridiculously, pants-crapping stupid as well?

There are actually some decent performances here.  The script is forcing them to say idiotic things but both Ed Quinn [IMDB] and William B Davis [IMDB] are undeniably good actors.  They’re also clearly smart enough to know that this movie is shit but they do their best.  I’m not going to begrudge them a paycheck.

This is one of the better Sci-fi Channel original movies for the performances alone.  Of course saying that is like describing one turd as more appetizing than another, but that’s about the best you’ll be getting.