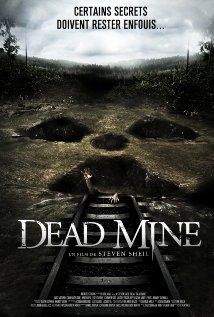 “Dead Mine” on IMDB

[This is the eighteenth selection in my irregular, “My Wife and Kids are Visiting Relatives and I’m Home Watching Movies” film festival.]

Not a whole lot to say about this this one.  It’s pretty simple.  A spoiled rich kids hires a couple scientists and a handful of rough-and-tumble mercenaries to escort him to an abandoned mine in Indonesia.  The rub is this particular mine had been converted to a secret laboratory where evil Japanese scientists (this is an Asian movie so the bad guys are the Japanese rather than Nazis, you see) were working on creating super-soldiers by experimenting on POWs.

Of course the trip to the mine is uneventful.  When they do find it it’s deserted and valueless.  They spend several days cataloging a handful of records of minor historical significance and then, disappointed, they  go home.

Nah, I’m just fucking with you.  They all die eaten by Japanese branded CHUDs.

The movie isn’t bad, really, just generic.  Although it was clearly filmed in English the entire thing was looped, very badly, which is a source of constant distraction.  At the very best it’s “TV scary” but not overly so.  It is nice to see a movie like this without Nazis.  The war in the pacific remains extremely fertile, mostly untilled ground for horror.  While this movie barely scratches the surface anything is better than nothing, I suppose.