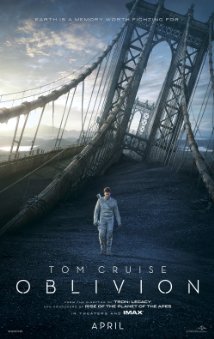 This is a good sci-fi movie.  Tom Cruise [IMDB] is still good enough to make you forget that he’s pants-crapping crazy.  Morgan Freeman [IMDB] is Morgan Freeman.  The effects are gorgeous.  The pacing is effective and the cinematography stunning.

It’s a good movie.  You’ll enjoy it.  Are we clear on that?  Good, because the movie was also really fucking stupid.

One of the basic premises of the movie is that aliens attacked Earth by “destroying the moon” which caused massive earthquakes, tsunamis and floods.  But then we see (admittedly beautiful) shots of the moon in the sky cracked in several pieces.

Firstly, gravity doesn’t work that way.  If most of the moon is in a place then the gravitational effects are essentially the same.  If the moon were really “cracked” as shown gravity would have, very quickly (in seconds, actually) pulled it back together anyway.  The movie presents a gorgeous image, but a dumbass one nonetheless.

Forgiving that, however, even if the moon was destroyed completely it wouldn’t cause all that many problems on Earth.  The tides would change, surely, and some nights would be dimmer but there wouldn’t be world-girdling devastation.  There are serious issues to consider across the millennia, but surprisingly little that would happen in 60 years.  Of course the unspoken issue is that any technology able to destroy the moon would be much more effectively directed at Earth itself.

Apparently, once the aliens landed in force the humans were forced to respond with thermonuclear weapons thus making much of the Earth uninhabitable.  Why aliens with the technology to cross star systems and destroy planets would bother with a ground war is never explained, but there you go.

Despite this mass devastation, nearly all of our shots of earth are clear skies.  You might suggest that this is some “backwater area” unaffected by the incident but we see the same thing in the site of former New York city.  A city which, by the way, is inexplicably buried under hundreds of feet of silt.

So, how to solve it?  Off the top of my head blasting chunks out of the moon and then directing those chunks toward Earth as city-killing meteoroids would much better explain the whole damn thing.  It would also eliminate the need for us to have nuked ourselves.  (We’re still ignoring the whole nuclear winter and planet-girdling dust storm but that’s better than what we get.)

In one flashback scene we see an exploration vessel from 2017 Earth redirected to investigate the alien ship (we’ll forget that we’re at best, 30 years at least from this being feasible).  Most of the crew is asleep in stasis pods in a rear section when the ship is engaged with a tractor beam.  The two conscious members of the flight crew decide to save the rest of the crew by ejecting the crew compartment (which will, apparently, automatically return to Earth orbit).

So we have aliens that, for reasons that become apparent later, want some still wiggling humans.  They have the technology to snatch them out of space but not, somehow, the ability to also snatch the ass-end of the ship as well?  I’m not sure how somebody would go about building a tractor beam, but I’m pretty sure it would be able to grab both halves of something.

How to solve it?  Just get rid of the tractor beam.  Use a tether instead.  Not only would a shot of a snaky, grabbing tether be a very cool, but would neatly explain how ejecting the crew compartment might work.  There could also be shot of the crew compartment moving just out of reach of another grasping alien tentacle.  How dramatic!

It’s difficult to explain without ruining some of the plot but suffice to say everybody in this movie is ultimately after Earth’s water.  They want to split the hydrogen off for “fusion”.  To accomplish this there are giant, floating, automated stations set up to suck up Earth’s oceans.

The problem here is straight forward: Earth is actually a pretty shitty place to get water from.  It’s not special in that has water, it’s special in that it has liquid water.  Liquid water is immensely special for evolution but as a raw resource, pretty common.

There are literally dozens of places in the solar system where collecting water would be simpler – especially for somebody with the technology to blow up the moon.  The Kuiper belt, an enormous cloud of objects hundreds of millions of miles from the sun, is made up of thousands, perhaps millions, giant dirty ice-balls.  Closer in, any of the gas giants have thousands of times more water than Earth in their upper atmospheres.

(Of course bothering with the water at all would be silly.  Those planets are basically raw hydrogen as is.)

We’re also confident that several of the moons of those planets have liquid water oceans under a thick layer of ice – and with massively lower gravitational fields than Earth making extraction much more efficient.  Even closer in, the asteroid belt is also likely littered with giant ice-balls.  Any of these sources, if water was your goal (again forgetting that hydrogen is the real goal) and you had the technology, could be easily leveraged without the Earth of 2017 even knowing.

How to solve it?  Well, the only thing that Earth absolutely has that all those other sources likely lack is life.  A huge percentage of Earth’s biomass is contained in ocean algae.  All the movie needed to do was make it clear that they were stealing the water and the protein.

A lot of the problems were smaller, but much easier to correct or ignore.  Simply moving the timeline out a little would have made much of the technology seem less ridiculous.  While the movie is set 65 years in the future, the war had started less than five years from now.  You’d have to assume that the end of the world might put a damper on research but the tech on display, even the 2017 tech, is incredibly advanced.

We see the “sleep pods” used by the astronauts work perfectly for 60 years – over 30 times longer than their stated mission time.  Also, once released from a pod after somehow surviving all that extra time, one of the astronauts is ready and running around literally hours later when the muscle loss alone would have been crippling if not fatal.  We also see a nuclear reactor the size of a breadbox powering the human exploration craft.

All we needed to hear was that the astronaut was put into a “cellular regenerator” or given “nano-therapy” or literally any other techno-babble you might want to suggest.  There’s no need to actually solve these problems.  Just intelligently acknowledge them is more than enough.

Easily ignored, but still weird, is the fact that the incredibly advanced automated drones deployed to defend the installations are both out maneuvered by the human-driven maintenance craft and totally, utterly incapable of hitting a god-damn thing.  Less understandable is why those drones are even needed once the full story is understood.

Oh, the rants I could make if I were willing to spoil the entire movie!

I really can’t stress enough: this is a good movie.  It’s a continued frustration, however, to watch otherwise good movies treat their audiences so shabbily.  It’s truly not difficult to present these stories without crapping so much on basic science.  Often, as demonstrated, all it takes is slight tweaks to the language used or the motivations given.  Here’s hoping that Hollywood will someday come to understand that sci-fi fans are smart people.