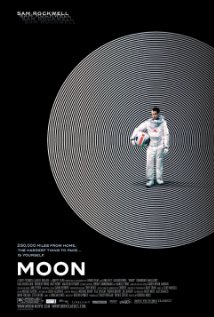 Having watched “Oblivion” [Our Review], a movie that breeds comparisons to this one despite having only tenuous similarities, I decided that it was time that my lovely bride see it.

The movie was written specifically as a vehicle for Sam Rockwell [IMDB] by writer/director Duncan Jones [IMDB]. Aside from a very small number of incidental appearances the only other main character is a helper robot voiced excellently by Kevin Spacey [IMDB].   (Spacey reportedly decided to participate only after seeing, and loving, the final cut of the film and then completed his lines in less than half a day.)

The movie was produced in a few weeks on a shoestring budget.  It’s impossible to discuss the plot in any depth without spoiling it and this is a story you don’t want to spoil.  Rockwell plays Sam Bell, a lunar maintenance engineer nearing the end of his three-year, solo contract.  He manages automated mining equipment that sends HE3, fuel for cheap, plentiful electrical power, to Earth.

For a sci-fi movie there aren’t many visual effects but the few there are all perfectly executed. When done well, as these are, practical effects are always more effective than CGI.  Painstaking care was taken to make the lunar surface as believable as possible and it paid off.  The vast expanse of Sam’s loneliness as represented by the environment is driven home beautifully.

This may well be Rockwell’s best performance to date and this is a man with many quality performances.  His portrayal of this lonely everyman and the disturbing discoveries that he makes, is nuanced, powerful and convincing.  He easily maintains your rapt attention from beginning to end.

This a slow, cerebral movie.  Like the best science fiction it examines basic human nature through metaphor.  The story is deeply engrossing and intensely thought-provoking.  This is a classic film and a tour de force for Rockwell.  Absolutely not to be missed.