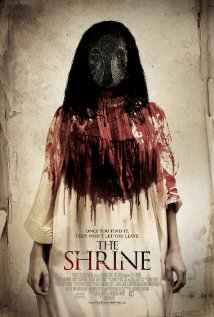 “The Shrine” on IMDB

Kids hiking through Europe are going missing near a small village in Poland and a junior reporter thinks there’s a story.  Her editor demads she report on Honey Bee colony collapse (because editors will always shift resources away from young missing Americans abroad to cover science stories).  Following her gut and ignoring orders she convinces her ex-boyfriend photographer and an intern to go AWOL and investigate the disappearances.

They arrive to a chilly welcome and, despite some very practiced stink-eyes, they decide to continue investigating.  When they come upon a dense, inexplicable fog in the woods they, naturally, spilt up to investigate.  The ladies come across something they shouldn’t have and the villagers address the matter as they always have; a method that just may have something to do with the disappearances.

I was being facetious but the movie is actually quite good and is absolutely better than most at this budget level.  The script, forgiving a few missteps, is tight and controlled.  The number of characters and settings are limited and maintain high-quality despite the budget limitations.  The story is clean, precise and smart.  It maintains respect for both the audience and the rules it defines.  There is a “twist” (which I tend to hate) but it’s both reasonable and logical given the context.

The movie can be rightly criticized for taking a safe, well-trod path but it does it well and with care.  Special effects are minimal, but well done.  They’re mostly used to deliver specific imagery.  While they don’t detract, I would have considered scaling them back even more.  I believe the actors would have been able to carry the scenes without them.

This is a solid, well-made movie with a solid, interesting (if not completely original) story.  Most low-budget horror sucks.  It’s too easy to play off clichés, cover your apathy with buckets of faux blood and fake the rest.  This doesn’t suck.  They didn’t fake it.