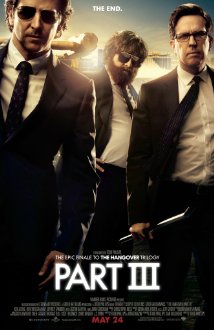 “The Hangover Part III” on IMDB

The repetitive second entry (our review) essentially tweaked the script from the first, and best, movie.  It tossed all of the potential character and relationship growth and said, basically, “let’s just do that again.”  This third entry is far from perfect, but is much more of a sequel to the first and much more satisfying for it.

The story focuses on the insane Mr. Chow (played by the hilarious Ken Jeong [IMDB]).  He’s broken out of prison and attracted the attention of an old enemy who blackmails our heroes into tracking him down.  Of course, things go pear-shaped almost immediately in almost every way.

There’s a lot of the same here.  Same kind of jokes, same kind of surprises and same kind of wince-inducing pain.  Fans of the first two movies will sense the same pacing and flow and that lessens much of the impact of the otherwise decent gags.  The second movie recklessly threw away much of the capital of the first by relocating the gang halfway around the world.  This entry wisely revisits locations and characters from the first and, from that, builds some of its best moments.

While both better than the second entry and a respectable follow-up to the first, neither is really saying much.  Fans disappointed by the second may find some value here, but simply won’t find the same magic.  It’s a decent ride but there’s no denying that this is a lazy, if glitzy, effort that mostly recalls former glory rather than forge its own.