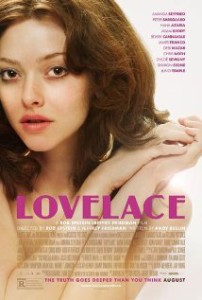 This is, like most true stories, difficult to watch without wondering what the real truth is.  In this case that’s made doubly difficult because the movie gives us two versions of the truth to choose from.  The first may be considered the “public” and the second the “private” version of events.

I think the film also lacked some impact for me, personally, because, as old as I feel, I had just turned one when the movie was released.  It would be at least three or four more years before I began patronizing adult films.  By then most of the hubbub had died down.

Forgetting for a moment the uncomfortable comparisons of Hollywood truth versus any of the myriad other versions of truth that may be out there the movie itself is very well done.  Of course the entire thing hinges on Amanda Seyfried’s [IMDB] performance and she doesn’t disappoint.  She captures a convincing mixture of innocence, naiveté and smoldering sexuality that carries the film well.  The film also captures the insidious nature of the abused/abuser relationship as we watch husband Peter Sarsgaard [IMDB] descend to more extreme expressions of control and dominance.

For all of the genuine discomfort and empathy that this relationship evokes much of the rest of the movie feels somehow stilted and a bit lifeless.  It’s difficult to put a finger on why, exactly.  It may be that the period dress or the slang doesn’t ring quite true or that the script tends to rush some things to support it’s dual-story structure in a reasonable run time.  The fact remains, whatever the reason: many scenes feel off somehow.

It many also be worth noting that while the movie is clearly and deservedly rated “R” it’s far from gratuitous or raunchy.  Considering the subject matter you might even call it downright coy at times.  Depending on personal perspective some may also question the film’s devotion to Lovelace’s version of events.  I know very little about the history of the claims made but am aware that they were considered quite controversial and none of that uncertainty is captured in the film at all.

Is it an accurate version of events?  I doubt anybody alive today can truly answer that.  It is a good movie, however.   Strong performances and an engaging central story carry it to a satisfying end.  It isn’t the Oscar-bait that many hoped it would be –  there are too many weaknesses for that – but it’s a solid drama and a thought-provoking look into the psychology of abuse.