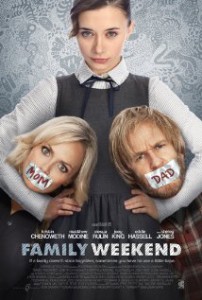 I looked forward to this.  I really like the cast and the “kids take over” premise enjoys an eternal life.  Like most it’s often done badly.  Sometimes very badly.  Still, periodically, it’s done so right that you always extend it at least the benefit of the doubt.

In this case Olesya Rulin [IMDB] plays Emily, a teenager so fed up with her parents self-absorption that she, with the help of her three siblings, imprisons them for a weekend of forced family therapy.  Of course highly controlling, power-broker Mom (Kristin Chenoweth [IMDB]) and hippy-dippy, stay-at-home artist dad (Mathew Modine [IMDB]) are resistant to the concept.   As time goes on, and more and more goes wrong, extreme measures are resorted to.

The movie is, overall, fine.  That may be damning with faint praise but, for me, the experienced was tarnished in two notable ways.  The first, and least, was the bizarre decision to stay with an “R” rating on what should have clearly been a straight family film.  The “sexual language” and “drug use” that earned the rating was hardly worth fighting for.  Removing them would have, significantly, improved the experience overall.

A vastly more damaging sin was the sad fact that Emily really didn’t actually do much.  Yes, she kicks the entire adventure off but after that seems to flail rather wildly.  For a movie like this to work, the roles have to reverse: the kids have to demonstrate a maturity and problem solving ability beyond their years while the adults correspondingly display an immaturity and need to be educated.  Here, the kids, especially ringleader Emily, tend to spend most of their time in panicked reaction to unnecessary complexities.

Emily’s attempts to make her parents understand tend to fail more or less completely.  In fact, sadly, the sequence that shows the most real progress and depth of emotion is orchestrated entirely by their grandmother. another adult.  By forcing them to turn to an adult for rescue the film disenfranchises the children at the exact moment when it should be most empowering them.  For me it was a subtle, but near fatal, misstep that hung a pall over the entire thing.

The (unnecessary spoiler!) happy ending is energetic and mostly satisfying but uneven.  The movie spent more time on madcap twists and unnecessary secondary characters  than true, believable growth.  It made the end feel contrived.  You’re still happy for the characters – despite their obvious flaws, they’re still genuinely likable – but you also get the strong impression that they didn’t really earn the ending.

It may be worth noting that my wife and daughter both loved this movie.  Just flat out adored it.  You can simply pass that off as chicks liking chick-flicks but I’m also willing to admit that I may have missed something.  Just know that the verdict was definitely split in this house.