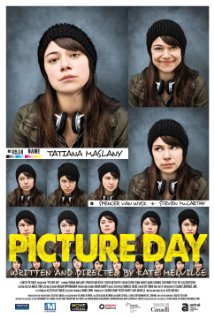 We gave this a shot because, after watching the excellent BBC America series “Orphan Black” [IMDB] we became very impressed with Tatiana Maslany [IMDB].  Her turn as an entire group of clones, all with radically distinct personalities, is truly impressive.  Very highly recommended.

Maslany plays Claire, a loose, free-willed girl being forced to repeat her senior year of high-school.  Attracted to extremes she finds herself involved with an older man who never managed to grow up and a freshman boy that she used to babysit who is old beyond his years.

The chemistry between the leads is often awkward but it works.  The performances are good, especially Maslany, but the spotty script rarely takes full advantage of the talent on hand.  The rest is a mixed bag.  The pacing stutters but never grinds to complete a halt.  There are plenty of head-scratching moments where characters seem to just… do things, for no apparent reason.

On the positive side the characters are interesting enough to hold interest and, despite their (many) flaws are generally likable. This slice-of-life may devolve to tedium now and again but there’s enough novelty to recommend that you give it a chance if you like this kind of thing.