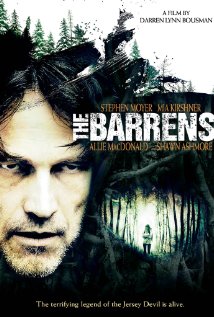 “The Barrens” on IMDB

Nearly all genre television is produced in Canada. Sure, it sounds crazy, but it’s true! If it has aliens, dinosaurs or ghosts it’s probably filmed in Toronto.  Apparently it’s cheaper or easier or something. Whatever the reason, pretty much every supporting character says “aboot” and all the doughnuts come from Tim Hortons.

When those TV productions break for the season everybody seems runs off and makes low-budget horror movies. Oddly, these movies tend to be just a little better than you’d think they should be. At the very least they’re better than most of the no-talent crap coming out of the U.S.

In this case we have Stephen Moyer [IMDB], of “True Blood” fame, and Mia Kirshner [IMDB], of SyFy’s “Defiance”, playing Richard and Cynthia Vineyard. They’re going on their first family camping trip to the New Jersey Pine Barrens. Richard, you see, had camped in the same place every year as a child and now wants to scatter his father’s ashes there.

The family’s relationship – already stressed for various reasons – is put under more pressure by the strange events of the trip. Nearing the park, a mutilated deer collapses in front of their car. Upon entering they then learn that some hikers were recently killed by a bear. That night, when other campers take fireside stories about the fabled “Jersey Devil” monster too far, Richard breaks and takes his family deeper into the woods. As time passes, Richard’s grip on reality fades and the situation spirals further and further out of control.

The character of Cynthia is a highlight. Strong female roles are rare in horror – women being relegated to either screaming sets of boobs, screaming punching bags or screaming trophies for the hero. Kirshner’s multi-layered portrayal isn’t going to win Oscars, but it is impressive; especially for the genre. Moyer’s performance is strong as well, but more limited by the overly clichéd character progression.

The overall story is promising but marred by an uneven execution. The Jersey Devil legends are rich source material but the script can’t decide how it wants to use them.  Instead of choosing to present a powerful psychological, descent into madness or a richly woven, bucolic monster tale it muddles the two together.

It’s still a solid, interesting effort, but the lack of focus ultimately drags it down. I’m still going to recommend it. The horror genre is absolutely glutted with carbon-copy dreck – a solid attempt at something different is absolutely worth checking out even if it missed the mark in the end.