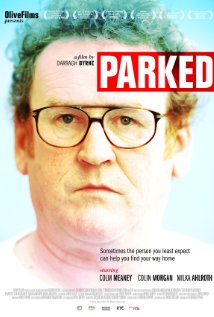 This is a quiet, little, personal drama. Like most quiet, little, personal dramas this lives or dies on the success of the actors. The script is crucial as well, of course, but good actors can carry a weak script – and weak direction, lighting, staging and pacing. If the actors can grab you up front and convince you that their characters are authentic, you’ll accept just about anything else.

The movie is slow and the pacing often, just a little, skewed. The cinematography is beautiful, but also rather bland and monochromatic, like a painting selected for a hotel room. Pretty but specifically inoffensive. The script is good, but sometimes relies too heavily on well-worn tropes. All of this doesn’t really matter, however, as both Colm Meany [IMDB] and Colin Morgan [IMDB] are very good actors.

The story focuses on Fred (Meany) a studious, hardworking man who has never really settled into life. Having returned to Ireland from England, he finds himself living in his car in a small, seaside parking lot. Unable to receive public assistance without an address, his life descends into quiet routine until Cathal (Morgan), an energetic, but broken, young man ends up parked as well.

The lengths to which Fred goes to maintain normality are a highlight. Meany’s calm detachment as he goes about his morning rituals, waters his plants, eats dinner or does his bookkeeping speaks volumes to Fred’s stoic acceptance of his situation. He checks on his claim, walks the neighborhood and swims at a local health club. He even strikes up the beginning of a relationship with a local piano teacher.

Cathal is the polar opposite. Young, dumb and drug-addled he moves through life on impulse and inspiration. Goodhearted but manic, he drags Fred bodily into the problems of his life but also forces him out of his rut. As their unlikely friendship grows, Fred’s situation improves but Cathal’s degrades despite Fred’s best efforts.

The progression is predictable but the performances are, again, what will maintain your interest. Meany, specifically, has had a good career but clearly deserves much more. He’s generally the highlight of whatever he appears in.  Seeing him in a meaty, feature role is worth the price of admission alone.