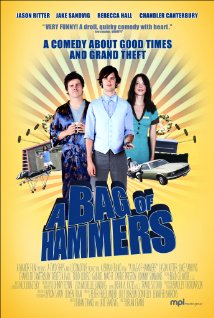 “A Bag of Hammers” on IMDB

The movie revolved around two friends in an eternal bromance bonded over their mutually shitty childhoods. They make a good living stealing cars from mourners at funerals. Their baggage makes them unable to keep other relationships intact. They begin to empathize with the child of the woman renting an apartment from them and  it eventually changes their lives forever. It’s difficult to discuss specifics without spoilers but it’s probably not to hard to see that this is about finally growing up, cobbling together families that shouldn’t work but do and finding out what’s really important in life.

There’s a lot to like overall. There are some powerful performances. Rebecca Hall [IMDB], as the concerned but pragmatic sister, deserves special attention as does Carrie Preston [IMDB] as the tragically broken mother who can’t seem to get a break (and may not deserve one). Young actor Chandler Canterbury [IMDB] also deserves a mention. His performance was rough but the talent is clearly there.  The two principles are less successful, their performances being rather dull and monotone, but are still effective enough.

The major issue I had with the movie was the pacing. It moves glacially slow in the beginning. It then ends just when the really interesting things begin to happen. In fact, the most interesting parts of the story are told as short vignettes during the ending credits. We spend significant time and energy on characters that, in the final reckoning, simply don’t matter or have any lasting impact. It’s as if the movie started 30 minutes too early then rushed through the ending because it ran out of time.

I’m not sure how to feel about this. I will say, for being billed as a comedy, it’s not funny. I can see where they felt they were trying to be funny, but this is a drama and saying “comedy” on the poster doesn’t change that. It’s not a bad drama, at that, but an extremely unbalanced one. There are definitely better movies that explore the same themes. All the same this does have an odd, if not completely convincing, charm to it.