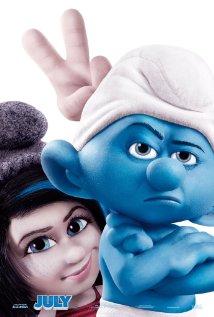 The Smurfs, like French Fries, are often mistakenly assumed to have originated in France. In fact both are Belgian! So, if you want to thank somebody for unleashing a swarm of little blue nitwits with shared speech impediments and mono-cultured personalities, find yourself a Belgian! They apparently also have a carrot museum.

The movie is fine. Absolutely, almost painfully, middle-of-the-road. It’s formulaic to a terrifying, militaristic degree. The pacing, plot, and emotional constructs all rigidly constructed from a merciless blueprint perfected eons ago by elder gods bent on the elevation of order above all.

The Smurfs are their greatest achievement: the devolution and separation of characters into individual character traits. Traits kept separate and distinct from one another like potatoes and peas on military plates. One actual character carved precisely into over a hundred single-dimensional pseudo characters presented as inoffensively as inhumanly possible.

Whole, fully-realized personalities are pierced by these fragmented shards like needles, painlessly but with dramatic affect. It allows the old ones to quietly, but persistently mark, grade and organize us to best suit their ultimate, dark purpose. “Smurfs 3” is already in production.