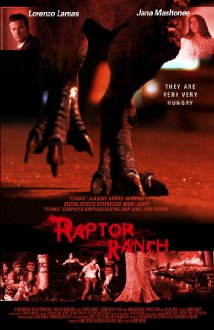 This is the simple story of a small-town hottie, three friends who run out of gas, a gay soul singer and his entourage all being eaten by dinosaurs grown in silos by a crazy old man.
I think it’s based on a Dickens novella. Or maybe a morphine dream. Whatever it is it’s certainly not “Jurassic” or any kind of park.

For one thing the movie transitions from night, where the rough edges of the effects could blend in, to day, where they looked like construction paper dolls. The movie also got really lazy. The action moved from open spaces to a single scruffy warehouse. The effects also really got really lazy. For example, the dinosaurs started just stepping on everybody. Just plain, smooshin’em. Blood-spat and done.

But hey, at least you get Lorenzo Lamas [IMDB], right?! He’s right there on the poster! Well, sorta. His character – a not-so subtle Fox Mulder clone – is seen for, maybe, four minutes. On the other hand, he also does absolutely nothing. Crappy dinosaurs and a (mostly) no-show star: how can you resist?!