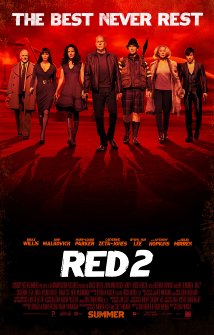 I’m a big fan of the original “Red” [IMDB] and, in general, of everybody involved with it. The comics are pretty damn sweet too. For those that don’t know, the story revolves around Frank Moss (played by Bruce Willis [IMDB]) a former CIA operative marked “RED” for “Retired: Extremely Dangerous”. The first movie covered how Frank met the love of his life, Sarah (Mary-Louise Parker [IMDB]), got his old team together and foiled a conspiracy that reached to the highest levels of government.

It was pretty great.

Too many sequels fall into the trap of erasing the gains of the original. “Red 2”, thankfully, has the good sense to pick up where the first left off.  Frank and Sarah are still together and still in love but Sarah is feeling the weight of their quiet life and could use a little adventure. Luckily,  another one of Frank’s old missions comes back to bite him in the ass and send him, and Sarah, around the world on an adventure to secure a cold-war weapon of mass destruction and save millions.

The action is smart and solid even if there are fewer “Oh shit!” moments than in the first. Although it didn’t bother me much they also toned down the “old people can kick-ass too!” shtick as well. The story is more complicated, which naturally leads to more exposition, but the characters are likable and enjoyable so you won’t mind much.   There’s a lot of humor throughout, most of it actually effective.

There’s much to say really. It’s not quite up to the level of the first but it’s head and shoulders above most. This is a fun, intelligent action movie with great characters portrayed by great actors. It’s a damn fine way to spend an evening.