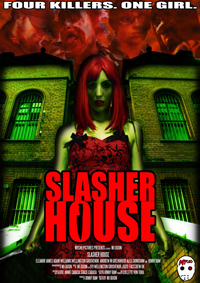 [Wife and kids are away visiting for the holidays. I’m staying home with movies and am back to the blood bucketing.]

This is pretty good ultra-low-budget horror. It’s a pretty damn bad anything else, but with a budget less than most used cars you do have to set expectations accordingly.  There is often an undeniable charm to be found when literally every penny counts.

Our heroine wakes up, naked and  amnesiatic, in a prison cell. After some time a klaxon sounds and she’s released. Finding several others in similar circumstances she soon discovers that she’s been locked in with four notorious serial killers. Can she survive?

The movie’s shot with a saturated green filter to contrast with the bright red wig and dress that our heroine spends most of her time in. The setting is cliched as hell but used well. The acting is as good as you’d expect for dozens of dollars but, with the exception of “Corben” who can’t act and won’t shut up, the script wisely keeps conversation to a minimum.

Our heroine fumbles and lucks her way through the roster to the point that you’ll likely have “Mister Magoo” flashbacks (if you’re old enough to know what that is). On the other hand the killers are clearly not all that great at killing if they can’t down this walking disaster. The killers themselves are introduced with brief, but well constructed, flashbacks. They range from a simple pedophile clown to an insane surgeon to a weirdly comic book-style rampaging strong man that loses his powers if you take his scary mask away.

This is the key to the movie’s ultimate failure: it bites off much more than it can chew. A simple, stylish story about a girl trapped with killers would have been a nice win at this budget. Instead the movie bakes in not one, but two, rather pointedly telegraphed twists. While the first is reasonable and even effective it doesn’t forgive the second. This takes the movie in a completely different direction and casts a large shadow of “what the fuck?” over the entire affair.