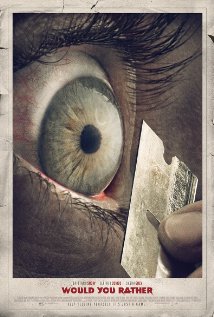 “Would You Rather” on IMDB

A group of people, all of whom are down on their luck, are invited to dinner at a posh mansion by a mysterious benefactor who promises that can solve all of their financial problems. When they arrive they’re given some time to mingle and get to know one another before the true purpose of the evening is revealed: a sadistic, fatal game of “Would you Rather” for the amusement of their wealthy host. The winner is set for life, the rest lose their lives.

The movie plays its hand early by introducing us to only one of the eight dinner guests before the event. As you may guess, that particular guest is not eliminated first. Brief, but equal, introductions to all eight would have increased the tension significantly. It would have also provided the audience the opportunity to empathize more with the other victims. A cold introduction, favoring none of the participants, would have also done the trick.

Accepting that, the movie plays out surprisingly well for low-budget horror. The game’s “rounds” are well-constructed and while simple, have a certain demonic charm. This isn’t an attempt to out-gadget movies like “Saw”, but a more subtle attempt to explore the psychological impact of forced, no-win decisions. Would you rather hurt yourself or the person sitting next to you? Would you rather heap more punishment on somebody already pushed the edge or brutally, perhaps fatally, harm the weakest person in the room? Would you rather accept a known, but likely fatal challenge or an unknown but likely brutal alternative? You have 15 seconds to decide or the nice man behind you will put a bullet in your brain.

Playing the obviously insane, but oddly honorable, benefactor, Jeffery Combs [IMDB] is a highlight. Although probably best known for “Re-animator” [IMDB] his work on “Star Trek: Deep Space Nine” [IMDB] (without argument, the very best “Trek” series – I said without argument!) demonstrated a sly, subtle genius. His smooth voice, practiced admonishments and barely contained glee fit the dual role as game master and primary audience perfectly. The rest of the cast is unfortunately unable to to match his performance but all are at least adequate for the most part and better than much of what the genre offers.

Some of the supporting aspects of the movie don’t always work – a subplot involving a former player having second thoughts falls particularly flat – but the brutally simple plot and Combs velvety cajoling keep things moving. There’s a definite predictability that may bother some more than it did me. While the proceedings are indeed graphic and disturbing the actual presentation is surprisingly tame. Those looking for buckets of blood will be disappointed. To its great benefit the movie relies significantly more on your imagination than on special effects and, to its credit, doesn’t descend into sexual or scatological sadism.

It manages remain twisted enough for genre fans while restrained enough for more general audiences as well making it an excellent “gateway” into more serious horror. It’s a great movie to watch with friends. You can all cringe together while you pretend that you’d know exactly what you would do in the same situation. Just hope you never get the chance to find out.