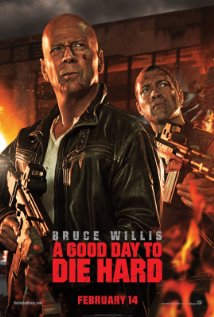 “A Good Day to Die Hard” on IMDB

John McClane’s son is in trouble in Russia. So he runs over and learns a single anecdotal fact about the entire country from the first person that he meets. Later he hinges a major life or death decision on it. Die Hard!

Then he finds his son, whom he’s not spoken with in years, and discovers that he’s not in trouble; actually he’s a spy working for the CIA. When the mission goes FUBAR John has to help his son complete it while periodically hollering, “I’m on vacation!” Die Hard!

The bad guys are doing something bad. Obvious  and predictable and bad. But they’re actually doing something else, even badder. There’s even a surprise double-cross. Die Hard!

The bad guys pick on Americans and westerns and John says, “Yippe Kai Aye, Motherfucker” before doing something stupid and awesome. Die Hard!

So, yeah, almost all the boxes are checked on the “Die Hard Checklist of Making a Die Hard Movie List of Checks”. I’m not sure why Bruce Willis [IMDB] keeps dipping into this muddy well when he’s got much more impressive franchises like “RED” (see my review of “RED 2”) to spend time on. It’s not even that the later “Die Hard” movies are bad; they aren’t. They’re perfectly adequate action movies. It’s that they are just not “Die Hard” movies at all.

There are at least two important practical aspects missing from this movie. Firstly, John McClane, in a very clear way, causes the problem. Granted, we later find out that this didn’t really matter but the fact remains: John doesn’t cause trouble, he’s a victim of it. The concept of “the right guy in the wrong place and time” is baked into Die Hard’s DNA. It just can’t be tossed aside without consequence.

Secondly, there is no immediate threat. This movie is about espionage, sociopolitical ramifications and real but ultimately theoretical threats. There are no rooms or planes full of hostages, some possibly pregnant. No schools full of kids wired to explode. No Family members or (sometimes) beloved spouses are about to be killed. Here John can, honestly, just stop. Sure the bad guys might get away with it, but they might also be picked up by the thousands of professionals that hunt down international terrorists every day.

There are many other tiny specifics that could be called out as “Die Hard” trademarks. The celebration of common heroics from the supporting cast (Al the cop or Argyle the limo driver in the first or the NYPD bomb tech in the third). The lack of a truly memorable villain (the villain here is utterly forgettable). A certain cleverness in problem solving (here, anything that can’t be shot is driven over, period). These are all missing.

More importantly, the movie just lacks a certain sensibility, a certain vibe that makes a “Die Hard” movie great. It’s a fine action movie, even if the plot is a little complex and the solutions a little too simple. It very likely would have been much better as a stand-alone movie taken out from under John McClane’s shadow.