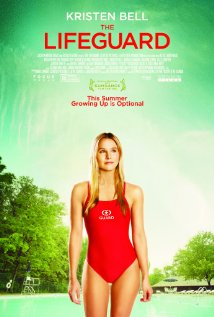 “The Lifeguard” on IMDB

Leigh (played by Kristen Bell [IMDB]) is having an existential crisis. Life just hasn’t turned out the way that she had hoped it would. In high-school she was a straight “A” student, class valedictorian and spent her summers working as a lifeguard at the local public pool. In real-life she’s working as the most junior of reporters at a scruffy newspaper in New York, dating the wrong guy and unable to get anybody to take her seriously.

So, at 29 years of age, Leigh decides, rather quickly and rather selfishly, to return to her home town in Connecticut and move back in with her parents. She gets back her old job as a lifeguard and begins to systematically regress to her teen years while dragging her few remaining old friends with her. She hangs out with the crowd of local burnouts and starts a relationship with a troubled teenager.

The movie does touch on the legalities of the relationship but doesn’t allow them to dominate. That said, if you watch the film with more than two people you’ve a good chance of somebody ranting at length about the double-standard involved. “If that was a 29 year-old man,” they’ll say hotly, “having sex with a 16 year-old girl this would be a different movie!” Yes. Yes, it would be. You’re very smart. Now shut up.

The movie is about trying to recapture youth and simplicity and ultimately failing because youth is, of course, only simple in retrospect. The script, with a few near-bizarre tangents, is able to make this point well enough but there’s a clear lack of confidence. The points being made are worthwhile but are often hamfisted. The excellent cast is able to smooth out the roughest parts but there are still noticeable snags.

This is a drama so there’s not much point in complaining that it’s a little slow; that’s like complaining that water is wet. Still, it is a little slow. It survives in that shadowy grey area where, if it were just a little worse, it would fall into the movie-of-the-week category and, if it were just a little better, it would be something really special. As it stands it’s a decent story and some strong performances.