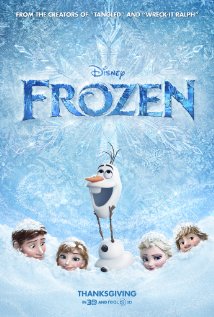 Hey kids, it’s time to dig up Hans Christian Anderson and carve another chunk from his desiccated flesh! Sure, we’ve left him alone  for awhile, but it’s time. We’ve been gouging at the Grimm boys for a while. We even did some Japanese imports! The crew over at Pixar’s been good to us but, dammit, we need a new princess to feed the machine! And this is a two-fer!

The princesses in question, Anna (Kristen Bell [IMDB]) and Elsa (Idina Menzel [IMDB]) have a complicated relationship. Elsa can create ice, snow and general chilly unpleasantness at will but has trouble controlling her powers. After accidentally injuring young Anna she sequesters herself from her family for years. Anna can’t remember the incident because her parents listen to a troll who takes the memory away. Apparently, letting her think her sister hates her is preferable.

Of course this is Disney, so the girls’ parents go and get themselves killed. At sea, this time. This leaves Elsa heir to the throne and the only one who can remember how dangerous she can be. Fast-forward a few years to Elsa’s coronation. It’s the first time that she’s forced into the public eye and things go south-polar quickly. There’s a couple of love interests, barrels of daring do and some uplifting family conflict resolution. Oh, and an oh-so marketable living snowman played by a quirky stand-up comic!

Know what? It all works! Well enough, at least. The animation is gorgeous. The artistic possibilities of ice and snow endless and the animators unleash as many of them as will fit into a 100 minutes. The characters are multi-dimensional and react appropriately. The exception is an annoyingly unnecessary role reversal later on. Really, Disney, we don’t need a villain every time.  The music is great and the singing from the leads (both of whom did their own vocal work) impressive. Hell, even the tacked on snowman merch-machine is pretty damn cute.

It’s difficult to judge how good, exactly, “Frozen” is. It absolutely benefits in comparison to the sea of mediocrity passing for family films lately. On the whole they’ve been trite, moronically formulaic and ultimately lacking in those intangible qualities that are obvious in true classics. “Frozen” has those qualities. Will it be a classic? I can’t say, but for right now, at least, it’s just the shot in the arm that Disney needed.